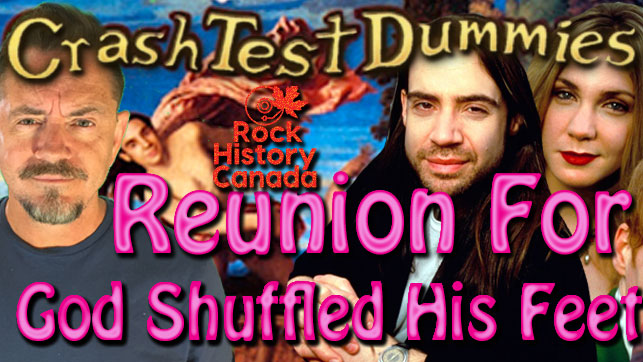 Brad Roberts, the voice of GOD is getting the group back together to celebrate the 25thAnniversary of their most successful album. It featured their worldwide Top 40 hit “Mmm Mmm Mmm Mmm,” which went #14 in their native Canada, #1 in Australia, Belgium, Germany and #4 in the U.S. The album actually had four Top 40 hits in Canada as well as a few more around the world.

With Brad Roberts deep bass-baritone voice the band certainly had a distinctive sound but it was his deep, curious, quirky, eccentric unique look at the human condition that made the band sound like no other.

Roberts told the KindlingGroup YouTube channel in 2011, “I didn’t want to be a songwriter ever since I was a kid. First and foremost I wanted to be a rock and roll guitar player. Then on a lark I went to the university and I did a double major in English and philosophy which I did purely for it’s own sake but again it’s kind of perfect for songwri, ting and I kind of ended up with the calling kind of falling in my lap. I think the calling choses you and you chose it. We have predispositions and if were lucky we get to exercise them. There are people that are extremely good at what they do but they just never get a chance.

The band also a cool cover of “The Ballad of Peter Pumpkinhead.” by Andy Partridge of XTC which was featured in the movie 1994 Jim Carrey. Jeff Daniel movie, “Dumb and Dumber.”

As for the 25thAnniversary of “God Shuffled His Feet’ the group plan to play the album in it’s entirety which is appropriate on a few levels. First it;’s the thing to do it and there isn’t a bad track on this album. In 1993 I was 33 and had just gone through the worse breakup of my life. I knew there was one thing I needed a road trip, not with friends. I had to deal with my dark nights of the soul by myself. I bought a new car and headed for California. I brought half a dozen Yes, Genesis, Toto and Elton John albums with me as well as another Canadian album “Five Days in July” that was released the exact same month as “God Shuffled His Feet.” Those latter two albums albums I played over and over, throughout Washington, Montana, California and Nevada. It was my first road trip by myself – two weeks of Blue Rodeo and the Crash Test Dummies just following my nose with no reservations or schedules.

For Canadian dates got to http://crashtestdummies.com