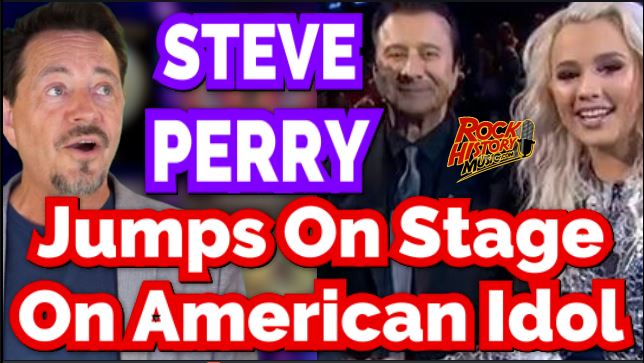 He sure can make an entrance. The much missed former Journey lead singer was in the audience when country singer Gabby Barrett, one of three finalist this year performed Journey’s biggest selling hit “Don’t Stop Believin’ which Journey keyboardist Jonathan Cain just told makes the band 5 times more money than any other song – maybe more than that after tonight.

After Gabby performed a country-flavored version of the tune all three judged (Lionel Richie, Katy Perry and Luke Bryant) jestured behind them to let her know who just heard her sing. There he was Steve Perry looking very impressed. Ryan Seacrest invited Perry on stage and then he said, “That’s the most amazing version I’ve ever heard, I swear it was beautiful, just beautiful.”

He’s a classy man and pretty generous with his comments. A country version of “Don’t Stop Believin” is not for everyone but I think It worked and I don’t like new country. After Perry’s comments Gabby said, “Thank you such, It’s an honour to sing it in front of you.”

The other two finalists are Maddie Poppe and Maddie Poppe. The American Idol finale is tomorrow night. – by John Beaudin