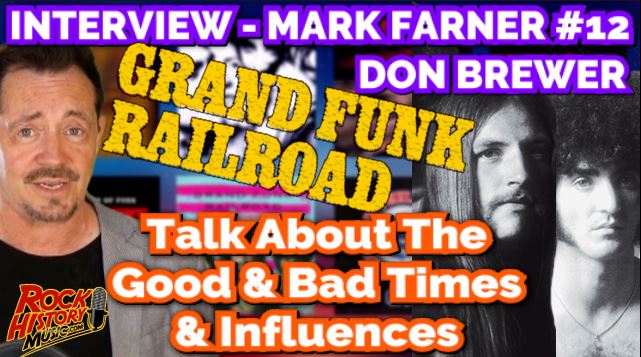 This is the last part of our 12 part series on Grand Funk Railroad. I had the pleasure of talking to both singers in the band. First drummer Don Brewer who now leads the group and former lead guitarist and singer Mark Farner a few weeks later. I think I speak for a lot of fans when I say it’s a shame they they don’t reunite. Original bassist Mel Schacher is also still in the band.

A few months ago Don and Mel of Grand Funk finally met the guy who wrote one of their biggest hits “Some Kind of Wonderful” John Ellison who sang it in his band Soul Brothers Six in 1967. Here’s Don Brewer. (Clip DB014)

I asked Mark Farner what was in his record collection before he became a rock star? (Clip MF012)

It’s been a good life for both Mark Farner and Don Brewer but they’ll also had more of their share of tough and sometimes terrible times. There’s the usual perils of Rock and Roll in the form of excess and then the tax man came knocking but more so there was their troubles with former manager produce Terry Knight. Severing that partnership was tough in the early 70’s. Now Mark Farner is not in the band even though, it seems, most fans want the original lineup back together. In spite of it all I asked Don Brewer If he looks back at it all with a sense of awe. (Clip DB001)

That’s it. Part 12 of 12 on our series on Grand Funk Railroad. Make sure you check out our merchandise store for Rock History Music sweatshirts, T-shirts, mugs and more and thanks for the support. Go to RockHistoryMusic.com or get the links in the description of this video. – by John Beaudin