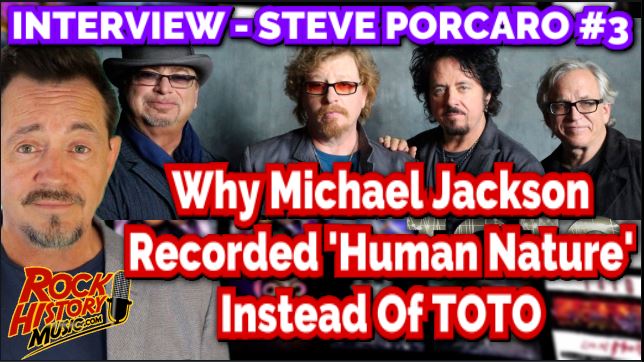 It’s the 9th anniversary of Michael Jackson death today – He died on June 25th 2009 at 50-years-old.We asked Steve Porcaro about not being too impressed by ‘Human Nature” at first in our last video. To him it was just another song and then Michael Jackson’s producer Quincy Jones hear it and the rest was history. Steve Porcaro co-wrote ‘Human Nature’ with John Bettis. Steve also does the synthesizer on the track and three other members of Toto appear on there including David Paich on synthesizer, Steve Lukather on guitar and Steve’s late brother Jeff Porcaro on drums..these guys are also all over the album. Also Porcaro, Paich and Lukather also arranged ‘Human Nature.’ It’s basically Michael Jackson singing lead vocals for Toto. I asked Steve Porcaro about the songs Toto history.

In 2016 Steve Porcaro released his first solo album in June 2016. Toto have just released “40 Trips Around the Sun’ a remastered greatest hits with three unreleased tunes. The band’s 2018 ’40 Trips Around The Sun’ tour start son July 30th in Vancouver, B.C. Canada and wraps up on Lynn, Massachusetts on November 17th. Go to http://totoofficial.com for details. – by John Beaudin