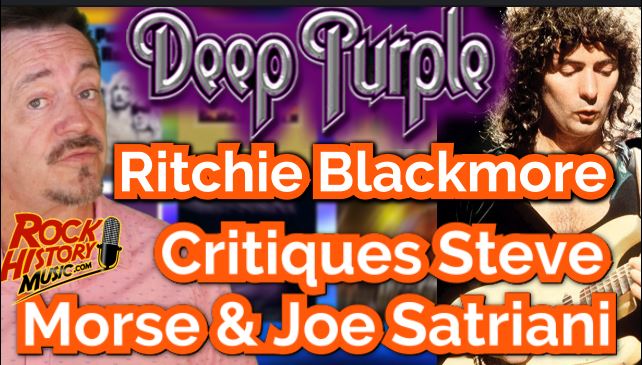 Ritchie Blackmore Shares What He Doesn’t Like About Joe Satriani

The ex-Deep Purple guitarist shared some thoughts on the Ritchie Blackmore Channel on YouTube, about his successors in Deep Purple – Joe Satriani and Steve Morse.

“Joe Satriani is a brilliant player, but I never see him really searching for notes; I never hear him playing a wrong note. Jimi Hendrix used to play lots of wrong notes because he was searching all the time – ‘Where the hell is that correct note?!’ And when he did find that right note – wow, that was incredible.

“If you’re always playing the correct notes, there’s something wrong – you’re not searching, you’re not reaching for anything. But that’s not to say that he isn’t a very brilliant player. Same thing with Steve Morse – fantastic player.

“I’m just glad they [Deep Purple] found a guitar player to carry on because I thought I was going to be shackled to this band for the rest of my life. It was like a ball-and-chain thing, and luckily they said, ‘Well, we found someone.’ ‘Thank God, I can get out!’

“I haven’t listened much, I just know that Joe Satriani and Steve Morse are brilliant players. I remember Steve Morse with the Dixie Dregs, they’re fantastic.

“If I hear someone really technical running up and down a fingerboard, I can hear that for a couple of minutes and then I start to kind of get bored and think of other things like playing football or something. But I do like to hear someone reaching for something, not quite making it and then sometimes they do make it.

“I personally am into the minstrel technique – if I hear someone playing a lute, it just moves me, I don’t know why. Guitar players I find kind of boring – and that’s not meant as a dig. I find myself boring. The guitar is a wonderful instrument in certain ways; like if you’re listening to something like John Williams play, then you know the man can play.

“I think the main objective is to move people, make people think in their heart. I personally am not interested in appealing to other musicians. To me, it’s more inspiring to move someone who doesn’t know anything about music, but has a feel. They can say, ‘I don’t know what you’re doing, but I just feel that’s something there.’ That to me is an incredible compliment, as opposed to, ‘Well, you’ve just run up and down the fingerboard. That’s wonderful, very fast.’ All that means is I’ve just practiced the hell out of the guitar and I’m not really saying anything. I’m going from A to B, but not seeing anything on the way.”

Joe Satriani was in Deep Purple briefly in the early 90’s and Steve Morse joined on after that and is their current guitarist. – by John Beaudin