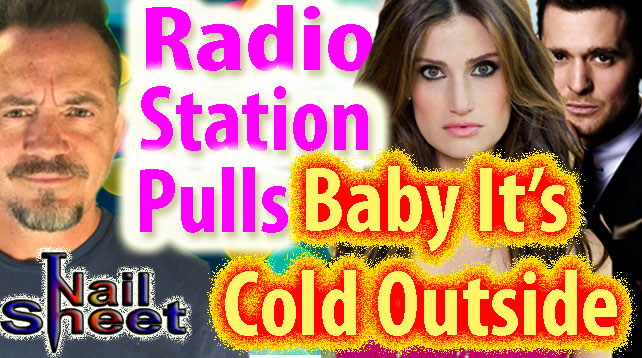 Is The song too racy for 2018? One Radio station thinks so. Star 102 in Cleveland

It’s a tune that’s been around since the 1940’s but time have certainly changed. Star 102 in Cleveland pulled the tune saying listeners raised concerns about the lyrics of the tune that’s mean to be a call-and-response. The man has her over to his place but she’s feeling uncomfortable about being there. This is not the first time it’s been called a bit, “date-rapey.”

The stations Glenn Anderson said, “We used to play the song ‘Baby It’s Cold Outside,’ but you’re the Christmas Executive Officer at Star 102 and you told us it’s no longer appropriate,” Anderson wrote on Tuesday. I gotta be honest, I didn’t understand why the lyrics were so bad…Until I read them.”

Anderson shared the song’s lyrics, which include lines like: “Say, what’s in this drink?”, “I really can’t stay / Baby don’t hold out” and “I ought to say no, no, no / Mind if I move in closer?” The woman also wonders aloud what others might think of her if she stays.

It was written in 1944 by Frank Loesser and he wrote it for he and his wife to perform at parties. The song was written and usually performed with a wink in the eyes but maybe not for the reasons some protesters think. It sure looks like it was all in good fun.

“Baby, It’s Cold Outside” was popularized with the 1949 movie “Neptune’s Daughter” in 1949 and sung between Esther Williams and Montalban’s characters.

As more woman are coming forward speaking out about sexual harassment and assault via the #MeToo movement the lyrics have taken as new meaning. One comment on this story said she felt Harvey Weinstein could have written the lyrics which seems extreme. Negativity towards the tune has been growing in the last few years.

Anderson continues, “Now, I do realize that when the song was written in 1944, it was a different time, but now while reading it, it seems very manipulative and wrong, The world we live in is extra sensitive now, and people get easily offended, but in a world where #MeToo has finally given women the voice they deserve, the song has no place. What do you think?”

We did a video last year on the best versions of Christmas songs and “Baby It’s Cold Outside” and we gave Dean Martins version the top prize with Honorable mention to Michael Buble and Idina Menzel. – by John Beaudin