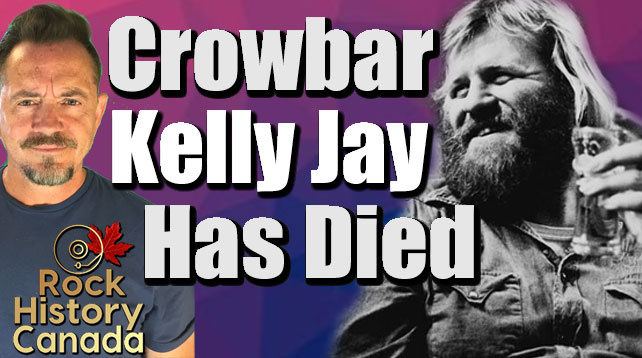 Kelly Jay of Crowbar Fame Has Died
June 21, 2019 – He was the big man in the band. Crowbar, who were best known for their hit, “Oh, What a Feeling,” were based out of Hamilton.

Jay(aka Blake Fordham) suffered a stroke a few days ago and at that point the prognosis was bleak. The vocalist and keyboardist “a severe stroke affecting the left side of his brain that he will not recover from.”

A few members of the band were originally Ronnie Hawkins backup group but in early 1970 they were fired
There’s a famous line that Hawkins shared about the boys and I’m paraphrasing..he said, Those boys could screw up a crowbar in fifteen seconds. Famed bluesman King Biscuit Boy was in the fold for all of that and so the first album “King Biscuit Boy and Crowbar” was released in 1970. King Biscuit Boy left later that year but would come back for guest appearances.

The band had a #29 Canadian hit with heavily covered blues standard “Corrina Corrina” in 1970. It was their sophomore album, Bad Manners” released the same year that came up with their biggest hit and an anthem for Canadian music “Oh, What a Feeling,” which peaked at #10 on the Canadian charts. It was co-written by Kelly Jay and Roly Greenway. They had other singles including “Happy People” in 1971, “Too True Mama,”” Dream,”” Fly Away,” and “Hey Baby” from 1972 and the Top 22 hit “Million Dollar Weekend” in 1973

Many remember the double live album from 1971, ”Larger than Life (and Live’r Than You’ve Ever Been)” recorded at Massey Hall in Toronto.

Since the first breakup in the mid-seventies Crowbar has had a few reunions including their induction into the Canadian Songwriters Hall of Fame in 2011 and recently in their native Hamilton.

. In 2015 the city of Calgary issued a warning to Jay over his old touring tour bus from the early seventies. He also ran into a hoarding problem he had said resulting from some great loses. His wife died of heart problems then his daughter disappeared in Japan in 1997 and the mother of his three kids died in an auto accident. Jay appeared in an episode of “Buried Alive” the hoarding show in 2013. – by John Beaudin

His family has set up a GoFundMe page to cover his ‘Celebration of Live.” Link here https://www.gofundme.com/kelly-jays-celebration-of-life