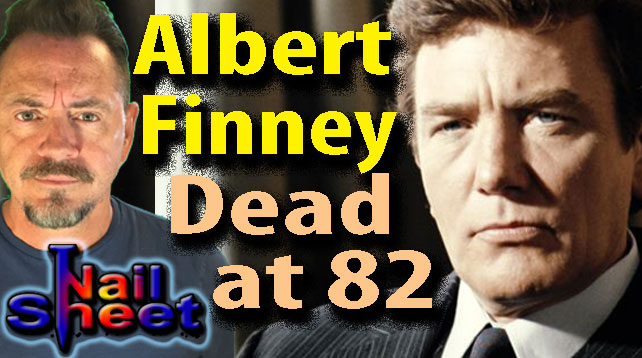 He became a leading man first in native England in the early 60s.

He died after a short illness. In 2011 he disclosed he had kidney cancer. The Guardian is reporting that Finney died of a chest infection at the Royal Marsden Hospital, which specializes in cancer treatment, his family were by his side.

Finney was born in Salford, Lancashire, England on May 9th, 1936. He called his family “lower middle class.” His headmaster saw something in him which led to a spot at the Royal Academy of Dramatic Arts sitting near notable classmates Peter O’Toole and Alan Bates. Theatre came first but by 1960 Finney was the lead in the film, “Saturday Night and Sunday Morning.” To many that was the film that launched his career.

Then came the title character in “Tom Jones” where Finney received the first of his four best actor nominations.

There was an interesting project in 1970 when Finney took on a different take of an iconic role of Ebenezer Scrooge in a musical version of the Charles Dickens classic, this time, called “Scrooge.” It’s a hidden gem in a world of multiple takes on this story but it’s always been my favourite version.

In 1974 he took on another iconic role, that of Hercule Poirot Agatha Christie’s “Murder on the Orient Express.” He stared opposite Diane Keaton in “Shoot the Moon” in 1982 a tale of couple falling apart. Finney received another Oscar nomination for “The Dresser” from 1983 and another Oscar lead role nomination in 1984’s “Under the Volcano.” He was nominated for “Best Supporting Actor” for 2000’s “Erin Brockovich.” There was also his portrayal of Winston Churchill in The Gathering Storm in 2002.