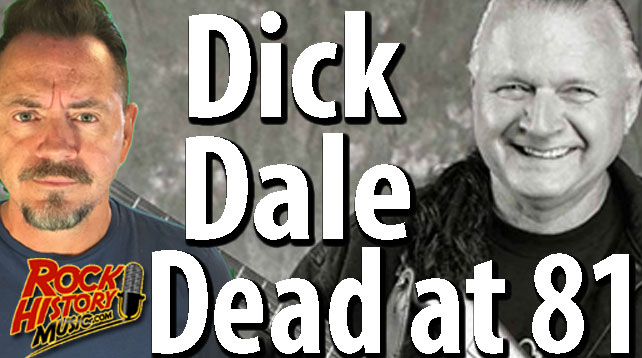 Dick Dale, The King of the Surf Guitar, Dead at 81

March 17, – Here’s a guitarist who could play fast. He was the pioneer in “surf rock,” best know for his 1962 hit “Misirlou.” He had a distinctive sound mixing middle eastern styles with lots of reverb and extremely fast picking. He once said that his sound was also influenced by the fast drumming of Gene Krupa and screams of wild animals and the feel of being on the beach.

He died last night. He was thew first wave of beach music and the Beach Boys had the second. Dale said he was Leo Fender’s test pilot for fender stratocasters adding, ‘When it can withstand the barrage of punishment from Dick Dale, then it is fit for the human consumption.’ So I blew up over 50 amplifiers. And that’s why they call me the Father of Heavy Metal.”

That 1962 hit Misirlou, which was a traditional song from the eastern Mediterranean region, became a national sensation when he performed it on the Ed Sullivan show that same year, It was also the theme from Pulp Fiction from 1994.Tarantino told Rolling Stone. “Having Misirlou as your opening credit, it’s just so intense, It just says you’re watching an epic, you’re watching a big, ol’ movie … It just throws down a gauntlet that the movie now has to live up to.” “Miserlou” has been streamed over 23 million time on Spotify alone.

He moved to California in the mid-1950’s and immersed himself in surf culture and would play lots of sold out shows at :”surfer Stomps.”

Dale retired from music in the 1970 but got the bug again in the 80’s. In 2015 he told the Pittsburgh City Paper, “I can’t stop touring because I will die. Physically and literally, I will die.” He had numerous health issues including diabetes and post cancer treatment that insurance would not pay for. – by John Beaudin