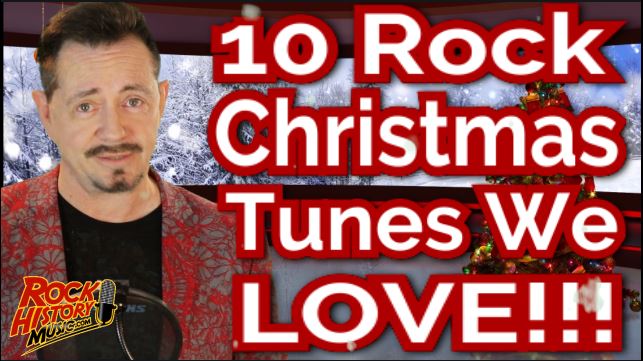 There’s a great rock driving riff on this one and at times it might be easy to forget that it is indeed a Christmas song. As one fans said on YouTube Rockin’ to Dokken at Christmas. John Levin on guitar.

It’s a metal Christmas for the famous Rob Halford famous lead singer of Judas Priest with his solo band project named after him and the album “Winter Songs” from 2009. It has a soaring Rock/metal feel that’s infectious. As OneEyeJack1970 said on YouTube “As a guitarist, a headbanger, and a Christian, I love this.”

This one almost never made it on this list because it’s almost too pretty and more than sounding rock it’s more in the Rock ballad feel. From 2007’s “Let It Snow, Baby…Let It Reindeer” which was really a re-release of their 2003 holiday album “Deck the Halls, Bruise Your Hand” with some extra songs. “Silver Bells” was a bonus track from the iTunes 2008 re-release.

Some British rock rom 2003. It was a single release and also avialable from he Christmas edition of their debut album “Permission To Land” album from the same year. It’s tied with “I Beliee in a Thing Called Love” from the same album as thier biggest hit – both peaking at #2 on the UK charts. So far they have had six number one songs on the UK Rock charts but none since 2006.

With the loss of singer/guitarist Rick Parfitt last Christmas eve (December 24, 2016) It’s appropriate to have this little gem on our list. For folks who are not from the UK and/or Status Quo fans you might have missed this one. Co-written by Parfitt and songwriting partner Wayne Morris it mixes some 60’s and 70’s influences into Christmas. Like Relient K’s Silver Bells it’s not as heavy but one to check out. The tune was included in the box set “Pictres – 40 Years of Hits.”

Alternate Rock with a soaring gorgeous chorus from their “Christmas Classic” EP from 2009 which also featured covers of “Silent Night” and “All I Want For Christmas Is You” unfortunatly the latter doesn’t add much to the original which happens to be one of the biggest Christmas songs of all time. “O Come, O Come Emmanuel” is in the power/pop/rock/ballad arena. Job well done.

Christian Rock band Citizens & Saints, formerly known as Citizens released this tune from their 2013 EP “Repeat the Sounding Joy” Though it’s not a huge departure from most versions out there aside from the rock feel its still fresh enough to make it on our list. We got a tiny bit of a U2 vibe in some spots via the guitar work. It has the quality that every tune on this video has – in some spots it sounds more like a catchy rock hit than a Christmas song but in the end every song has both.

An alternative rock band from Kansas City, Missouri. Unfortunetely it was announced that lead singer Dan Eaton was leaving the band in 2011 but word is the band will carry on without him. With Ska swimming in alternative rock this one also reinvents the original from the 1966 TV special “How The Grinch Stole Christmas” which was originally sung by Thurl Ravenscroft with his deep tones.

It’s a medley of “God Rest Ye Merry, Gentlemen and Ukranian carol known as ‘The Little Swallow” first released by the metal band Savatage in 1995 and re-released by Trans Siberian Orchestra the following year on their “Christmas Eve and Other Stories’ the following year.