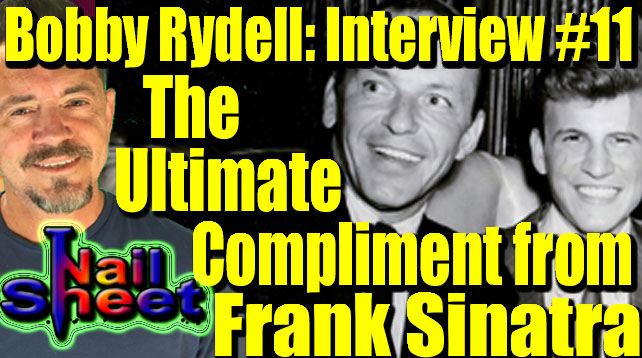 (#11) Bobby Rydell On That Nervous Day He Met Frank Sinatra

Click On the Link Below to See the Entire Video

I ask everybody that I interview if they’ve ever been star-struck even though they themselves are stars and 99% of them say yes or course. Bobby Rydell was a huge teen idol in the late 50’s early 60’s with hits like “We Got Love” a #6 hit from 1969, his highest charting tune “Wild One” from 1960 which hit the #2 spot, months later “Swingin’ School” hit #5 and then his signature tune ‘Volare” that peaked at #4 and his last top 10 from 1962, “The Cha-Cha-Cha.” There’s an interesting story in his book “Teen Idol on the Rocks: A Tale of Second Chances” where he talks about a big compliment that he think is coming from Frank Sinatra Jr but it’s better than that. In this clip Rydell also talks about meeting Sinatra Sr. And the nerves that come along with that. (Clip 013 – 2:40)