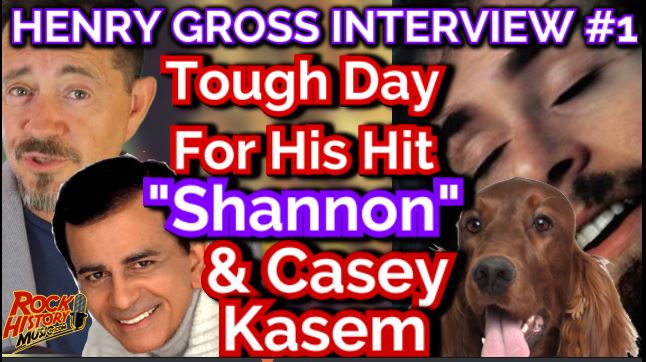 This is part one of our series on Henry Gross a gifter guitarist who played Woodstock at 18 as a member of Sha Na Na. Anyone growing up in the 70’s has heard his biggest hit “Shannon’ more than a few times. The tune reached #6 on the Billboard charts in 1976 and went to #1 in Canada and New Zealand. It was easily one of my favorite songs from that year. The tune was inspired by both he and Beach Boys’ Carl Wilson owning an Irish Setter name Shannon. What are the chances when you consider how rare of a name that would be for a dog. After spending the day with Wilson at his home Gross was touched by how Wilson lost he beloved dog. He was hit by a car. Gross returned home and wrote the tune in 10 minutes. The song was certainly a commercial high point for the singer but It didn’t fit in every gig. (Clip 001)

Have you ever heard the famous Casey Kasem outtake concerning the song “Shannon”? A listener had requested the tune as part of Casey’s regular “Long Distance Dedication” feature about another deceased dog name Snuggles. The problem was Casey was coming out of an uptempo Pointer sisters tune into this sad dog story. We will have a link to Casey’s outtake in the description of this video.

We will have more from our Henry Gross interview next week. It was one of the longest interviews I’ve ever done. I loved this man’s take on politics, the music industry, comedy, Elvis, Chuck Berry, Tommy James, Baseball, being comfortable in one’s skin and basically the human condition. You can order Henry’s new music at HenryGross.com. – by John Beaudin