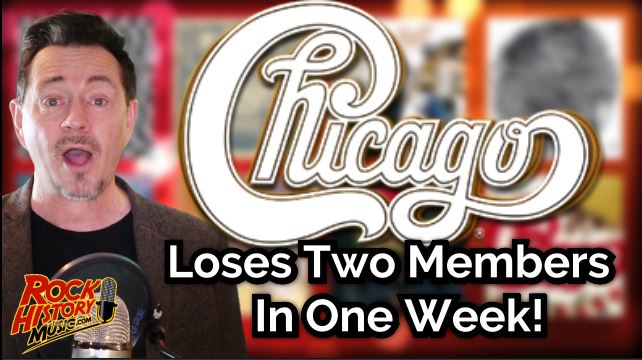 This is a band that has had a revolving door of members through the years but just this week bassist and vocalist Jeff Coffey and drummer Tris Imboden both announced they were leaving for family reasons. They were kind of saying the band tours too much for them.

Coffey’s note to the fans said, “I am coming to you today with a heavy heart to announce that I am also leaving Chicago. In fact, we both played our last show earlier this week. As many of you know, my family is my whole world! We’ve all faced this same dilemma at some point, I’m sure. As Tris eluded, the scale here leans more and more towards heavy touring, with NO time for anything else. It wasn’t the right balance for me. As Chicago moves forward, I wish them continued success with their long and illustrious career.”

Chicago released a statement wishing Tris well and announcing Walfredo Reyes Jr. who has been playing percussion for the band for the last 5-6 years would be their new full time drummer. He’s also played with Carlos Santana, Steve Winwood and Smokey Robinson. The statement also said goodbye to Coffey saying “While Jeff was only with us for a short time, we are grateful for his considerable contributions and his dedication. We wish him continued success with his solo career and in all his professional endeavors.”

The band also addressed the toll of being on the road, “The rigors of touring are immense. Now, in our 51st consecutive year of touring, we understand the toll it takes on families, the birthdays and milestones that are missed and the strain of being away from loved ones for weeks at a time. Chicago routinely plays over 100 events a year. When you add in travel days, band members are away from home for over 150 days a year. It is a difficult life, but also one filled with tremendous rewards. We look forward to sharing those rewards as we welcome new members to the band.”

And the announcement of their new singer, “Many of you are already familiar with Canadian Neil Donell who has been enthusiastically received as a guest vocalist with Chicago on occasion, we now welcome him as an official band member taking over lead tenor vocals. On bass we will be joined by Brett Simons who has toured and recorded with musical icons such as Brian Wilson, Fiona Apple and Melissa Etheridge. We will be posting more about these new members in the weeks and months to come, and hope you will embrace them with the same love and support you have for all present and former Chicago band members.

Chicago has four remaining members of the band from the good old days vocalist and keyboardist Robert Lamm and the horn section Lee Loughnane, James Pankow and Walter Parazaider. Walter is still a member of the band but touring is not part of his life anymore. – by John Beaudin