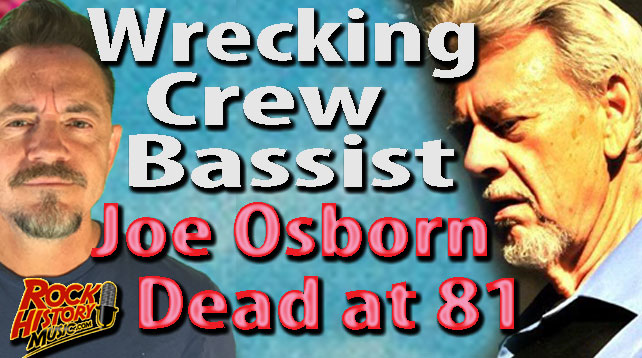 Though unknown by name to most of the general public Osborn helped shape the sound of Rock and Roll.

You have heard him on many records from Simon & Garfunkel and the Mamas & the Papas. He was part of a unique group of gifted studio musicians called the Wrecking Crew who were unsung heroes in the history of Rock and Roll. Artists who were often more gifted that the person with his or her name on the album cover.

You can see Osborn on early videos with Ricky Nelson. He played on “Travelin’ Man” from 1961. After moving to L.A. In 1964 he was recruited by writer/producer Lou Adler and engineer/producer Bones Howe to join the Wrecking Crew.

Some of the tracks that Osborn played on included, the Fifth Dimension’s “Aquarius/Let the Sunshine In,” Grass Roots’ “Midnight Confessions,” the Association’s “Windy,” Richard Harris’ “MacArthur Park,” Simon & Garfunkel’s “The Only Living Boy in New York” and “Bridge Over Troubled Water,” America’s “Ventura Highway” and the Carpenters’ “Close to You.”

Osborn also played on Neil Young’s ‘Comes a Time” from 1978 and 1985’s “Old Ways, Billy Joels debut album, “Cold Spring Harbor” from 1971, 1970’s “Self Portrait,” by Bob Dylan, the Beach Boys’ “Sunflower” from the same year and Paul Simon’s self-titled second album from 1972. There was also Simon & Garfunkel’s “Bridge Over Troubled Water,” the Mamas & the Papas’ “California Dreamin,” ‘”Neil Diamond’s “Holly Holy,” Glen Campbell’s “Gentle On My Mind,” There were over 600 recording credits.

He would go into the recording studio with the rest of the Wrecking Crew and they sometimes had no idea who the final artist was actually going to be and he had said many time that he didn’t mind that others took the credit for the work he did including the Monkees who mimed their tracks.

Osborn died on December 14th after a long battle with pancreatic cancer. – by John Beaudin