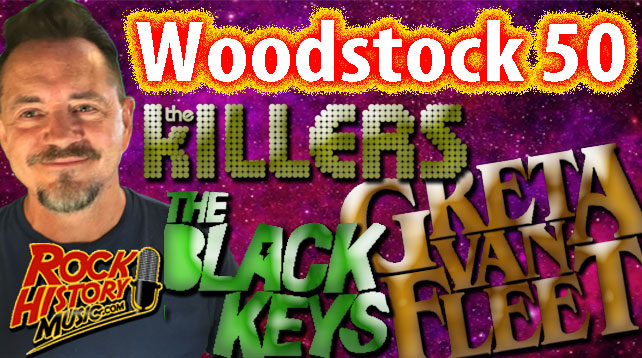 Billboard magazine was reporting a few days ago that the festival, the big weekend concert celebration, was having possible financial problem via it being a first time festival and all the acts had to paid in full before any announcement were even made. Well it looks like things have been ironed out with everybody. Today

it was announced that The Raconteurs, Imagine Dragons, Run the Jewels, Gary Clark Jr., Cage the Elephant, Dead & Co and Chance the Rapper have been booked along with the aforementioned the Killers, Greta Van Fleet, Black Keys, Killers, Jay Z, Miley Cyrus

Janelle Monáe, Kacey Musgraves, and Halsey are also supposedly in the lineup

Michael Lang, who was part of the original Woodstock said in a statement, “We are thrilled with all the excitement about Woodstock 50, but we have an obligation to our fans, artists and partners, to do things the right way,We are in the final stages of laying the groundwork and can’t wait to stage this once-in-a-lifetime event. We’ll be officially announcing the lineup and ticket on-sale soon, stay tuned!” He did promise us a “multi-generational bill.”

The other Woodstock festival has already released their lineup at the Bethel Woods Music and Culture Festival alongside Arlo Guthrie, Ringo Starr, Edgar Winter, the Doobie Brothers and Santana. The latter is also being courted for the bigger show along with Robert Plant. The Bethel Woods show is also on August 16th and 18th.

Given the Woodstock brand, the lineup thus far is curiously slanted toward modern artists. However, Variety reported that Robert Plant and Santana, two acts who were actually alive and performing in 1969, are in the mix for the revamped fest.” He did

Santana — who played one of the most iconic sets at the original Woodstock — are also scheduled for the competing That event takes place between. By John Beaudin