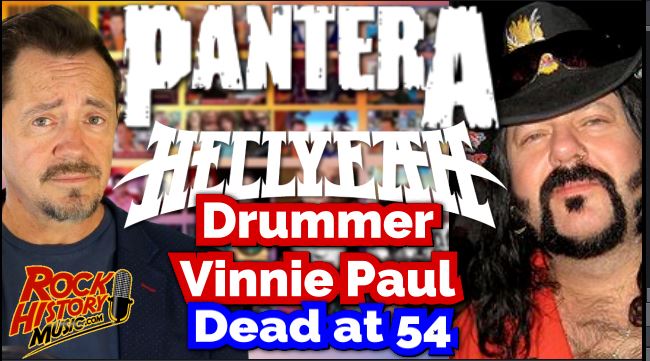 This came as a big surprise for many metal fans.

The following statement was released last night, “Vincent Paul Abbott aka Vinnie Paul has passed away,” reads a statement on the Pantera Facebook page. “Paul is best known for his work as the drummer in the bands Pantera and Hellyeah. No further details are available at this time. The family requests you please respect their privacy during this time.”

He formed Pantera with his brother, Dimebag Darrell, Paul in 1981. They recorded nine studio albums. Four of them went Platinum including their biggest ‘Vulgar Display of Power” from 1992 which went double platinum. The album featured, “Mouth for War”, “A New Level”, “Walk”, and “This Love.” Including live and best of projects Nine of their albums charted in the Billboard Top 200 albums chart. In 1994 ‘Far Beyond Driven’ reached #1 while their last two ‘The Great Southern Trendkill’ from 1996 and 2000’s ‘Reinventing the Steel’ both peaked at #4.

After Pantera the brothers formed Damageplan in 2003 but the following year Dimebag Darrell was shot and killed onstage during a concert by a deranged fan.

Since 2006 Vinnie Paul was the drummer for Hellyeah who have released five albums on the Billboard Top 20.

The band Anthrax tweeted, “Can’t believe it. R.I.P to our brother Vinnie Paul,” Paul Stanley of KISS said, “So sad to hear of the death of Vinnie Paul. Loved when Pantera did shows with us and in later years Vinnie was always front and center at all KISS shows. RIP and condolences to his family.”

Dave Mustaine of Megadeth said, “Another metal hero taken too soon, Say hello to Daryl for me. Rest In Peace, my dear friend.” – by John Beaudin