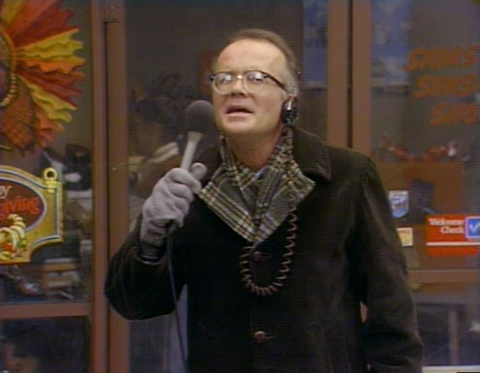 WKRP in Cincinnati was my favorite TV show in the seventies. When it debuted in 1978 all I wanted, besides chicks, was landing a fair start as a radio DJ. By then I had already been playing “pretend” radio guy in my bedroom for 6 years. I loved everything about WKRP but they really hooked me with an episode called “Turkeys Away” or the “Turkey Drop” as many called it.

It begins with station manager Arthur Carlson (played by the late Gordon Jump) feeling left out when Andy Travis, the new Program Director (Gary Sandy), starts making changes to their format. He decides to prove his worth with a special Thanksgiving promotion – throwing turkeys out of a helicopter not knowing that the birds can’t fly.

Clarke Brown a real radio exec who worked on the show says the Turkey drop was based on a real event from his days in the biz. The difference was their turkeys were thrown from a truck but they still went splat and much like WKRP their staff were ridiculed.

Brown says WKRP was based on the real station WQXI in Atlanta and some of the characters were inspired by the staff including modeling salesmen Herb Tarlek (Frank Bonner) after himself. “Not to that extreme, but I was kind of known for dressing wildly, mod clothing and so forth. But he was making fun of me.”

On “Turkeys Away,” Tim Reid who played late night DJ Venus Flytrap said, We’d get the script a day or so before table read, so you know going in whether or not you’ve got something that’s going to be a lot of fun to do. And we all just couldn’t wait to get there. I think it’s one of the first times in four years that we were all ever on time for a table read.”

The sweet spot in the episode came with newsman Les Nessman (Richard Sanders) witnessing the turkey bloodbath and echoing his play-by-play as if it was the Hindenburg. Production Associate Max Tash said “Turkeys Away” showed the direction that the series was eventually going to go in.”

The cast and crew were never sure how much of the audience would get the Hindenburg connection but it was intended from day one. Reid says, “We all sat in the room and we watched the actual crashing of the Hindenburg as it was recorded [in newsreel footage], over and over, and we sat there as he [Sanders] did it. And he did it so well. If you look at him and look at the guy who gave the report on the Hindenburg, you’ll see the similarities.”

wkrp_turkey_drop_002This was one of many shining moments for Sanders playing Les Nessman. Sandy says, “He was my favorite character on the show. I thought Richard was incredible in that part of Les Nessman. He knew what he was doing every single second, every moment that he was on camera.”
Who could forget Les describing the birds landing and shouting “the turkeys are hitting the ground like bags of wet cement.”

Reid said it was the hardest episode for the actors not to burst out laughing. In the end Mr Carlson came back to the office with Herb Tarlick looking shell shocked and delivers the famous line, “As God is my witness, I thought turkeys could fly,” READ MORE AT http://johnbeaudin.com