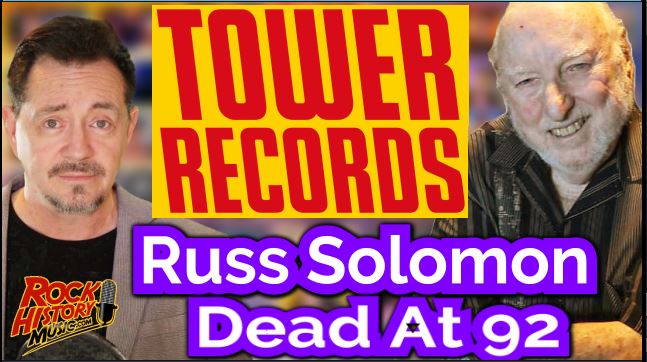 When vinyl fans needed the full experience they went to Tower Records. On my first visit to LA in the early 90’s I needed to find their flagship store on Sunset and Horn.

Solomon was a visionary. Not everyone picks the right lane in life but here was a man who did. He was only 16 when he started selling records in his father’s drug store and Solomon liked that “meeting-place” vibe for music lovers. You could spend half of your day in the store and come out with a few new friends and your mind expanded with fresh musical discoveries.

The Sacramento Bee reported that Solomon was watching the Academy Awards last night. His son Michael said that his dad made a statement about someone wearing some ugly outfit then asked Patti (his wife) for more whiskey and when she came back Solomon was dead. He suffered a heart attack.

Colin Hanks, son of Tom Hanks, created a documentary in 2015 about Tower Records that featured special guests Elton John, Bruce Springsteen. Also featured in a clip was former employee Dave Grohl (Foo Fighters/Nirvana) who said in the film that Tower Records was the only place he could get a job with his long hair.

Tower Records, at it’s peak had stores all over the globe. They went out of business in 2006. A big part of their demise came from the digital age.

In the mid-1970’s I first started noticing a certain kind of trust that some artists had achieved from their fans. Springsteen earned it, so did Elton John and the Eagles and a decade before that was the Beatles and the Stones. Tower Records created a similar bond with their customers. Going there for some was an event and fans felt at home there. My first thought on going into that huge store in LA was I knew I would leave knowing much more about music from some acts I never knew ever existed. – by John Beaudin