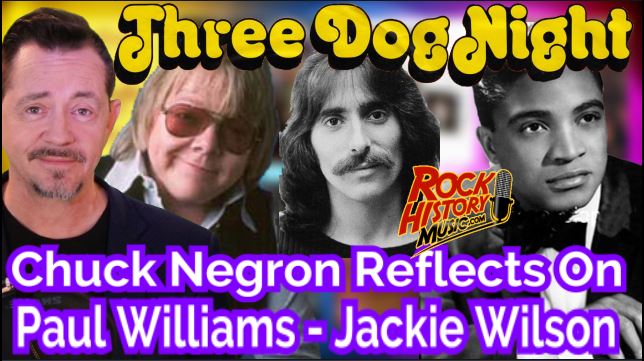 It takes a lot to make a great singer. In this age of auto-tune a Disney princess can have a number one song without anyone really knowing if they have any real talent or singing chops.

Even though Three Dog Night was known as a vocal trio featuring Chuck Negron, Cory Wells, who died in 2015 and Danny Hutton but they were actually a full band. Keyboardist Jimmy Greenspoon died in 2015. He was 67. Bassist Joe Schermie passed in 2002 at 56. Drummer Floyd Sneed left in 1984. Right now Three Dog Night only consists of Hutton on vocals and guitarist Michael Allsup from their first album.

Still having three vocalist front-and-center leaves no room for mistaked. These guys were juggling some amazing vocals and were all huge stars in their 20’s. I asked Chuck Negron if back then he ever got star struck by meeting anyone? CLIP 14

Three Dog Night covered some Paul Williams tunes like “Family of Man” and one of their biggest hits, “Just an Old Fashioned Love Song.” I told Chuck that I was surprised on how some people did not know who he was even though he wrote so many hits and was on TV and in the movies so much in the 70’s. (CLIP 17)

The Paul Williams/Roger Nichols tune “We’ve Only Just Begun” was, of course, recorded by the Carpenters. It was one of their biggest hits reaching #2 on the charts in 1970.

The 4th Edition of Chuck Negron’s popular book “Three Dog Nightmare,” including 11 never before published chapters is available at ChuckNegron.com. All copies are signed by Chuck. I asked him why he wrote the book in the first place? CLIP 1 – by John Beaudin