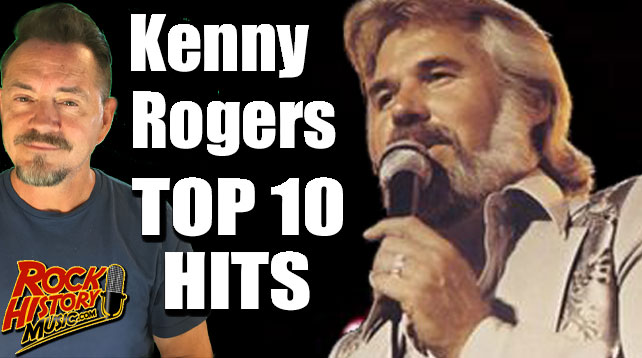 What a life. What a career. He charted over 120 songs in different genres like country, pop and adult contemporary and sold 100 million records worldwide. He’s won all the big music awards Grammys, AMAs, ACMs, and CMAs and he’s in the Country Music Hall of Fame.

He was born Kenneth Ray Rogers on August 21, 1938. He was the fourth of eight children. In the 50’s he had a minor hit called “That Crazy Feeling” but his first real success came as a member of First Edition which formed in 1967. They are best known for “Just Dropped In (To See What Condition My Condition Was In)” #5 on the Billboard charts, the #19 hit “But You Know I Love You” and “Ruby, Don’t Take Your Love to Town” which reached #6. Rogers left the first edition in 1976 and as much success as he had with the band the best was yet to come.

The eighties were also very fruitful, “Don’t Fall in Love with a Dreamer” (with Kim Carnes) was a #4 hit. Lady top the charts. In 1981 “I Don’t Need You” peaked at #3. In 83 Rogers had two big duets, “We’ve Got Tonight” (with Sheena Easton) peaked at #6 and “Islands in the Stream” (with Dolly Parton) reached the top of the charts.

In September of 2015, Rogers told NBC’s Today Show that he was retiring from music after one final tour to spend time with his family. – by John Beaudin

-9- “Don’t Fall In Love With a Dreamer” featuring the tunes co-writer Kim Carnes #4 in 1980 from “Gideon” Carnes would have the #1 hit “Betty Davis Eyes” the following year.

-7- “Lucille” #5 in 1977 from the self-titled album (7.8 million streams) It was his first solo hit after leaving the First Edition. It was also #1 on the country charts and the UK charts.

-4- “Coward of the County” #3 from1979 from “Kenny” (20 million streams) Kenny tells an amazing story of a Tommy, boy who is known as yellow/weak who grows into the same type of man. One day his wife Becky is attacked by the Gatlin brothers that when Tommy tracked the boys at a saloon, comes in they laugh at him, Tommy closes the door behind him and Tommy turns into the man his dead dad never wanted him to be hoping for forgiveness.

-3-“Lady,” #1 in 1980 from, “Greatest Hits” (17 million streams) Written by Lionel Richie Rogers once said that it was an attempt to join Richie’s R&B and Kenny’s Country. It was also Richie’s first production outside the Commodores.

-2- “Islands In the Stream” (with Dolly Parton) #1 from 1983 from “Eyes That See in the Dark” (77.5 Million streams – making it Kenny’s second-biggest song). It also knocked Bonnie Tyler’s “Total Eclipse of the Heart” out of the #1 spot. Written by Barry, Maurice and Robin Gibb of the Bee Gees it was also #1 all over the world.

-1-“The Gambler” #16 in 1978 from the album of the same name (77.9 million streams making it Kenny’s biggest song on Spotify) It inspired 5 TV movies with Kenny Playing Brady Hawkes.