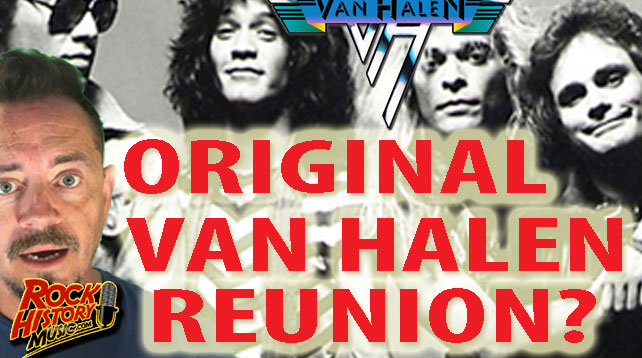 Could Van Halen’s Original Line-Up Be Reuniting?
I’ve been bombarded by that question today. I’ll tell you the latest and yes, I know, it’s a rumour and something we try to stay away from on the channel.

With all the bad blood between guitarist Eddie Van Halen and original bassist Michael Anthony how could there be a reunion? There’s this thing called money. If this tour happens next year this would be huge money for all the members. So fans haved said just shut up and take the money!

Roth has been talking about this “Original thing” on the way and then radio guy Eddie Trunk told Ultimate Guitar, “The rumours from reliable sources – but still rumours that are unconfirmed – is that the band will tour in 2019 with the original band, which would mean the return of Michael, So again I cannot stress enough that is not confirmed in any way shape or form but there are starting to be some real substantial rumours about that as we close out 2018.”

Ultimate Classic Rock pointed out that Trunk said that the rumour involves the band playing big stadiums and that David Lee Roth had told Vulture that next time his band would play in the same place where the Yankees play.

Anthony has also worked with the famous vocalist for Van Halen’s second incarnation – Sammy Hagar. He’s the man who replaced Roth and did some big project with Anthony including Chickenfoot but Anthony has been open to a reunion of the original band. He looked at it as “closer.”