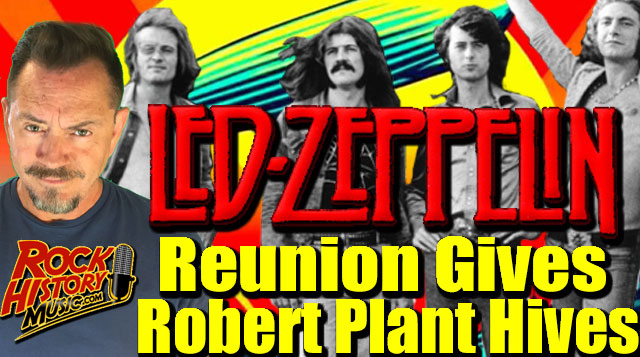 The Idea Of a Led Zeppelin Reunion Gives Robert Plant Hives
May 15, 2019 – Well here is further​ info that Zeppelin is not getting back together. Robert Plant told Planet Rock that he was inspired to do the O2 London reunion show from Pink Floyd, he said, “I liked what (Pink) Floyd did at Live 8 – a quick one-off and let’s leave it at that. They did it for a good cause,”

“It’s was the same when (Led) Zeppelin did the charity show for Ahmet (Ertegun). We had a prolonged affinity with Ahmet, so if there was ever a reason for (a reunion) to happen, that was it.

“But the idea of doing it next summer and the summer after that and so on is enough to break me out in hives.”

He also has been looking back at Zeppelin from a different perspective, “My peer group were writing substantial pieces of social commentary, and I was willowing along the Welsh borders thinking about Gollum.

“I liked what I did, but now I look at it and go ‘Wooh, that was a bit iffy.’ But I do like ‘Stairway To Heaven. I can look at it objectively. I can’t always get my head around it, but it does do something substantial.”