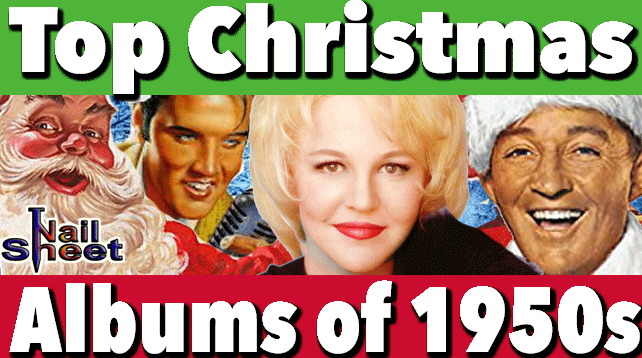 Best-Selling Christmas Albums of the ‘50s – by Jason Klose

Originally released in 1945 on Decca Records, the compilation album Merry Christmas by Bing Crosby was the best-selling Christmas album for six consecutive years (1945-50). The album includes Crosby’s signature song “White Christmas,” the best-selling single of all time with estimated sales of over 50 million copies worldwide. Merry Christmas has sold over 15 million copies and is the second best-selling Christmas album of all-time behind Elvis’ Christmas Album, which has sold more than 19 million copies worldwide. The album’s original 1945 release and subsequent re-releases and re-packages spent a total of 39 weeks at No. 1 on the Billboard pop albums chart. The original album consisted of ten songs on five 78 rpm records, all of which had been previously released. Each one had a holiday theme, except for “Danny Boy,” paired with “I’ll Be Home for Christmas” on its original record. The album also includes the holiday classics “Silent Night,” “God Rest Ye Merry Gentlemen,” “Jingle Bells,” and “Santa Claus Is Coming to Town.”

1952 – Christmas Hymns and Carols, by The Robert Shaw Chorale

Considered their definitive recording, Christmas Hymns and Carols by The Robert Shaw Chorale had several incarnations, first appearing in the 1940s as a box of four 78 rpm discs. The best-selling Christmas album in 1952, it also went to No. 5 on the charts in 1949 and 1957, then hit the charts another three times during the ‘60s. With its seamless medleys and majestic harmonies, it is to this day the gold standard for choral Christmas recordings. The album features such traditional hymns and carols as “O Come All Ye Faithful,” “Silent Night,” “Joy to the World,” “Deck the Halls,” “Lo, How a Rose E’er Blooming,” and “I Wonder as I Wander.”

Christmas with Arthur Godfrey and All the Little Godfreys featured was the cast LP of radio and television broadcaster and entertainer Arthur Godfrey’s 1950s CBS-TV show, which featured a small group of regular performers that became known as the “Little Godfreys.” Although relatively obscure, these artists were given colossal national exposure and included former “Talent Scouts” winners such as Hawaiian vocalist Haleloke, veteran Irish tenor Frank Parker, Marian Marlowe, and Julius LaRosa. The best-selling Christmas album of 1953 includes traditional hymns and carols such as “It Came Upon a Midnight Clear,” The First Noel,” and “O Holy Night,” and holiday favorites like “Frosty, the Snowman,” “Rudolph, the Red-Nosed Reindeer,” “Jingle Bells,” and the Hawaiian-themed Christmas song “Mele Kalikimaka.”

From the 1954 movie, White Christmas, Selections from Irving Berlin’s “White Christmas” featured artists Bing Crosby, Rosemary Clooney, Danny Kaye, and Trudy Stevens (who dubbed for Vera-Ellen in the movie), with Peggy Lee, who was not in the movie, singing some parts. The album was issued with Columbia’s Irving Berlin’s White Christmas and was one of the last 78 rpm albums Decca Records produced. Because Crosby had a recording contract with Decca Records and Clooney was signed with Columbia Records and contractually could not record together, an original soundtrack recording from the movie has never been released. On the album, Lee recorded the parts that Clooney sang in the movie. The album was Crosby’s third Decca LP, recorded and released in 1954 and advertised as the soundtrack for White Christmas.

In 1955, an album of Christmas songs and carols by singer Jo Stafford titled Happy Holiday, was the best-selling Christmas album of the year. On the album, Stafford is accompanied by her husband, pianist, arranger, composer, and conductor Paul Weston and his orchestra. The entire family participated in the creation of this album – Stafford and Weston’s young son Tim Weston is the small boy featured on the cover. Stafford is also joined by The Starlighters for vocal background, just as she was after her version of the NBC Radio musical variety program The Chesterfield Supper Club moved to Hollywood. The album includes such favorites as the title track, “The Christmas Song,” “Let It Snow! Let It Snow! Let It Snow!”, “Toyland,” “Winter Wonderland,” and “O Little Town of Bethlehem.”

Lawrence Welk’s Merry Christmas from Lawrence Welk and His Champagne Music was the best-selling Christmas album of 1956. The accordionist, bandleader, and television impresario, brings his unique style, which came to be known as “champagne music,” to the holiday season with vocal performances by The Sparklers on “White Christmas” and Christmas Island,” and The Lennon Sisters on “The Christmas Toy.” The album also features many holiday favorites, including “Let It Snow! Let It Snow! Let It Snow!”, “Santa Claus Is Comin’ To Town,” and “Winter Wonderland.”

Elvis’ third studio album and first Christmas album, it was released October 15, 1957. The album spent four weeks at No. 1 on the Billboard Top Pop Albums chart and was the first of two Christmas-themed albums Presley would record, the other being Elvis Sings the Wonderful World of Christmas, released in 1971. Elvis’ Christmas Album is the first Presley title to attain Diamond certification by the RIAA and is also the best-selling Christmas album of all time in the U.S. With total sales of more 20 million copies worldwide, it remains the world’s best-selling Christmas album and one of the best-selling albums of all time. The album is divided into a program of secular Christmas songs on side one, which includes favorites like “Here Comes Santa Claus” and “Blue Christmas; and on side two, the traditional Christmas carols “O Little Town of Bethlehem” and “Silent Night,” and the four gospel numbers from Elvis’ 1957 EP Peace in the Valley, which were added to the holiday album six months after its release.

As a best-selling recording artist with the NBC television series, Sing Along with Mitch, oboist, chorale leader, and conductor Mitch Miller released his holiday LP Christmas Sing-Along with Mitch, which became the best-selling Christmas album for three consecutive years, from 1958-1960. The timeless family tree-trimming classic features primarily religious holiday favorites like “Joy to the World,” “What Child Is This,” “We Three Kings of Orient Are,” “Hark! The Herald Angels Sing,” and “God Rest Ye Merry, Gentlemen.” The album also includes a rousing version of the traditional Christmas carol “Deck the Halls.”

About the writer – Jason Klose is an arts and entertainment writer based in Central Pennsylvania, with experience in print and online media. He has a particular interest in music and television history and is always looking for new and exciting projects. Jason has interviewed several prominent artists and personalities in the entertainment industry including: Linda Ronstadt, Barry Manilow, Tony Bennett, Charlie Daniels, Dennis DeYoung (Styx), Nancy Wilson (Heart), Lou Gramm (Foreigner), Amy Grant, Rosanne Cash, Clint Black, Sara Evans, Carrie Underwood, Bob Eubanks, and many more. Jason’s work can be found on his website: https://jasoncklose.contently.com/