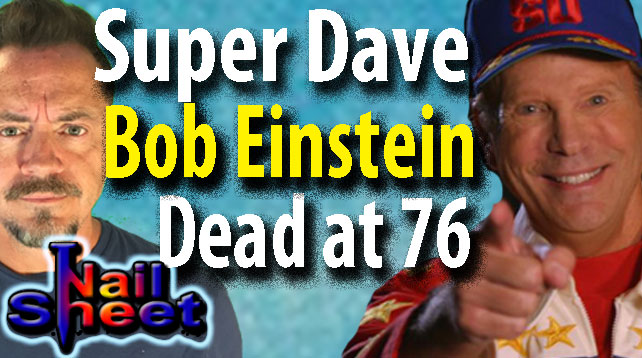 January 2, 2019 – His famous younger brother Albert Brooks who is an actor, Writer, Director, released the statement, “R.I.P. My dear brother Bob Einstein. A great brother, father and husband. A brilliantly funny man. You will be missed forever.”

Many knew him as the fearless, naive daredevil Super Dave Osborne from the John Byner Comedy Hour in the early seventies, that same team brought him back on Bizarre from 1980-1985. Super Dave also appeared on the Tonight Show With Johnny Carson, Late Night With David Letterman, his own show from 1987-1991 and Hollywood Squares, In Living Color among others.

Einstein had a long career recently he was Marty Funkhouser, Larry David’s old friend on “Curb Your Enthusiasm.”

His big break came via The Smothers Brothers. He was a writer on the show and was known for playing Officer Judy.

Einstein also won one of his Emmy’s from that stint. He captured another Emmy working with Dick Van Dyke in 1977 as well.

I knew him forever. ♥️to his loved ones. His long career is hard to match. His role on #curbyourenthusiasm was excruciatingly brilliant! Our cast and crew will be devastated.

He was so loved. He told me how much he loved LD and Curb. RIP buddy. ⁦@HBO⁩

Einstein was born in Los Angeles in 1942. His father was comic Harry Einstein and mother actress-singer Thelma Leeds.

As a writer IMDB also credits Einstein on The Ken Berry “Wow” Show, The Sonny and Cher Comedy Hour, The Hudson Brothers Razzle Dazzle Show and Bizarre among others. As an Actor there was the TV series Anger Management, The Man Show and The Pat Paulsen Half a Comedy hour. He was on Jerry Seinfeld’s Comedians In Cars twice and multiple Super Dave specials. – by John Beaudin