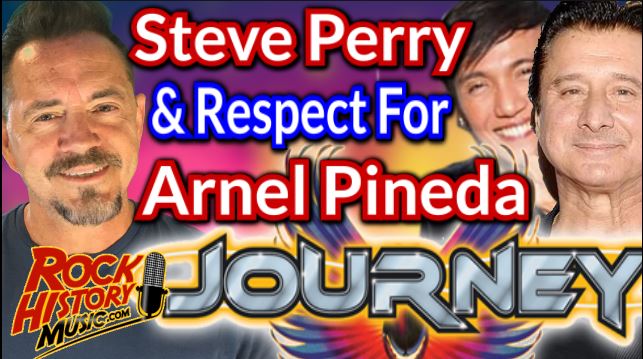 Talk about a balanced dude. Talk about a classy one. While talking to the Scott Shannon show Steve Perry had lots to say about his replacement in Journey Arnel Pineda. When Scott Shannon asked him about not singing at Journey’s Rock and Roll Hall of Fame induction Perry said, Arnel is an amazing singer and puts out his heart to the band and the material every night and has been with the band for 10 years now. This isn’t a lightweight thing for him. It’s really something that his heart’s into. He’s the singer in the band and I have no business going into that. It’s wonderful that he’s singing that material, those melodies. Listen I’m a singer, he’s a singer I’m kinda on his side.

Then a co-host pipes in and says something like you’re the voice of those songs and the crowd goes nuts. Scott Shannon then says that he interviewed Arnel Pineda 5-6 years ago and asked Pineda if he’s ever met Perry. Arnel says no and that Perry is his hero, Shannon then lies and says he know Perry which makes Pineda ask for an introduction.

Perry then talks about that famous picture of them hugging backstage at the Rock and Roll Hall of Fame induction. So what did he tell Pineda backstage? He says, “Arnel, are they being good to you? Cause if they’re not give me a call.” Arnel never called.