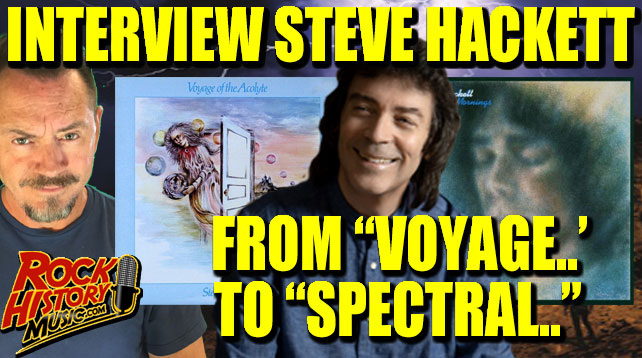 6- Steve Hackett Says Much Happened Between His First and Third Albums
May 27, 2019 – This is part four of an 11 part series of our third interview with Steve Hackett. Two of those are on our sister channel Rock History Book as we go Track-by-Track look at his new album “At the Edge Of Light” and his third, “Spectral Mornings.” I’ve always liked the progression that an artist goes through from album to album. I asked him about that. Clip – 011

CHECK OUT THE VIDEO https://youtu.be/y06eRmbtMc8

Steve Hackett will be on tour all year tipping his hat to three main albums his new one, he’ll be playing the entire Genesis album, “Selling England By The Pound” and the 40th Anniversary of his third album, “Spectral Mornings.” Go to our sister channel Rock History Book for our Track-by-Track look at his new album, “At the Edge Of Light” and a Track-by-Track look at that 3rd album “Spectral Mornings.” – both with Hackett talking about each song. For more info on Steven Hackett go to Hackettsongs.com – by John Beaudin

CHECK OUT THIS HACKETT VIDEO Interview: Steve Hackett – Track By Track of “At The Edge Of Light”