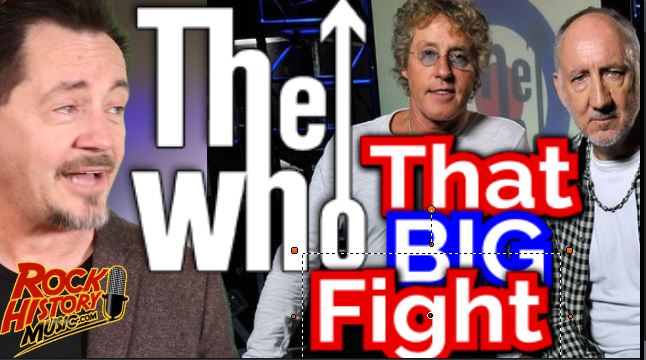 Roger Daltrey On The Time He Thought He Kills Pete Townshend Daltrey’s new autobiography is called “Thanks a lot Mr Kibblewhite” When talking to CBS news Daltrey said, “I expelled me from school after giving me six shots of the cain for being a rather naughty boy. As I was leaving His office, he held the door open for me, and as I walked passed him he said, “You’ll never make anything of your life Daltrey” and with the arrogance and the anger that was going through me I thought I’ll show you, Thanks a lot Mr Kibblewhite”

The singer says the Pete Townshend guitar smashing came out of a temper. “We were playing a club with a low ceiling,” Daltrey says, “and he used to have this thing about playing his guitar that ways” as he raises his hands above his head, “and I think he might of jumped a little bit and the neck of the guitar hit the ceiling and broke and made Townsend completely furious and this was a Rickenbacker which was in those days, well the equivalent today would have been ten thousand dollars. It could have been repaired but not after he finished. I thought what I would have done for that guitar four years earlier when I was making my own guitars through lake of money but equally we saw the effect it had on the audience. They went crazy and we thought this might be another key in the door to success.”

After overt 60 years now playing with Pete Townshend there was bound to be some big fights, Daltrey told CBS news, “We were rehearsing Quadrophenia and there were camera crews who were suppose to record the rehearsal and they were sitting on their camera boxes and they didn’t even film a foot of this whole rehearsal and I said, “when are you going to start filming this is a hard piece of work to sing and i’m not doing it twice and by now Pete had drunk at least one bottle of brandy maybe a bottle an a half and he wanted to have a go at me saying, “you’ll do what your told and he started spitting at me and the road crew who knew what my red mist was like they jump on me and hold me with both arms and with that Pete says let him go I’ll kill him. They let me go and he swung a guitar at me which bounced off my shoulder and then he started throwing punches at me but bless him Pete he was drunk even when he’s sober he’s not a fighter. I just hit him an he kind of left the floor and I thought I killed him.”

When asked about retirement Daltrey said, “We’ll be done when we can’t do it as it need to be done anymore. There’s something about the who that i’m really proud of. There’s an energy in the Who that we’ve never cheated and thats the thing, If I ever feel, isn’t there in me anymore because I can’t speak for Pete, but if it isn’t in me as singer to deliver those songs and give them that energy to rock. Not Rock and roll is music to make love to the music of the who is music to fight to and it’s really very different.” – by John Beaudin