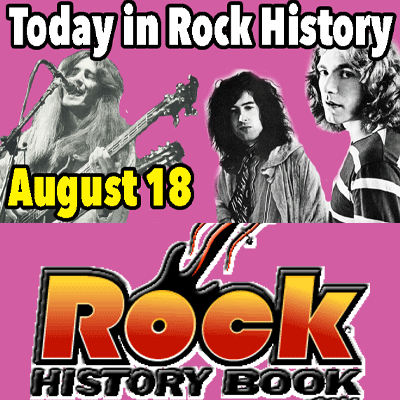 August 18, 2022 – In 1969 the original line-up of Rush (Alex Lifeson, Geddy Lee and John Rutsey) captured a Led Zeppelin concert at the Rock Plile in Toronto. Geddy Lee Told Classic Rock Magazine, “They were doing two shows, we were at the first show. It was general admission. We lined up for hours. We got in and we sat in the second row. And I swear they didn’t walk out on stage – they floated out. They literally brought the house down, because by the end of the night there was plaster falling from the ceiling.”

Fast forward to Rush releasing their self titled debut album in 1974. So far the boys didn’t have a big record deal forcing them to make the project available on their own label Moon Records.

It was then that the Led Zeppelin connection came back via the U.S. radio station WMMS-FM in Cleveland, Ohio. Station announcer WMMS played the track since it fit three main criteria. (1) Cleveland was a blue collar working mans town so the listening audience would relate to the lyrics. (2) WMMS was what we miss in FM radio, they played album oriented rock and “Working Man” was certainly that. (3) With a running time of 7:07 it was a perfect reprieve for a smoke or bathroom break for any DJ.

Interestingly, when the phones started ringing some listeners were assuming the Rush song was actually a new tune from Led Zeppelin. All the hoopla led to Rush being signed to Mercury Records. – by John Beaudin

John Beaudin has been in major market radio (Edmonton, Vancouver & Calgary) for 40 years and a music journalist since 1989. He graduated from Broadcasting school as a newsman so he would have the skills to write about the artists that inspired him since he bought his first album, “Madman Across The Water” by Elton John as a teen. In the ’80s Beaudin was the host of the syndicated radio show “The Cross Canada Report” which had two versions (Rock and A/C). Beaudin was also asked to be a judge at the Juno Awards (Canada’s answer to the Grammys) Twice. He has anchored every position in radio including morning and afternoon drive and was a Program and Music Director for The Breeze and California 103 in Calgary. He currently hosts a weekly evening show at Move 103.5 (formerly QM-FM) in Vancouver and on iHeartRadio.

What Ever Happened To Ace of Base? “Rock History Book”