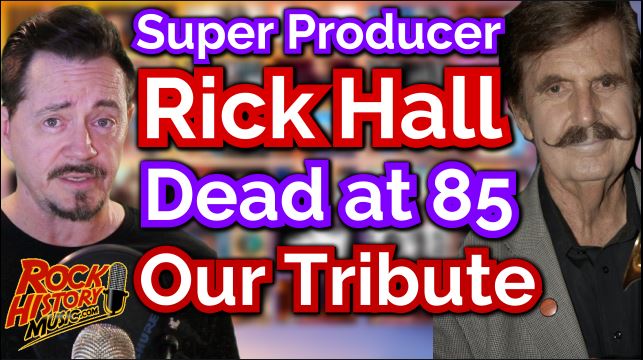 He had a wide Brush incorporating many genre’s under his umbrella including everything from Country, R&B and Pop via his Fame studio and publishing company which was responsible for an over 350 million record sales. We were talking tunes like Percy Sledge’s”When a Man Loves a Woman” and hundreds of artists including Aretha Franklin, Etta James, Wilson Pickett, Brenda Lee, Roy Orbison, Mac Davis, Paul Anka. Terri Gibbs, Ronnie Milsap, Larry Gatlin and the Gatlin Brothers, John Michael Montgomery, Tim McGraw, The Dixie Chicks, George Strait, Martina McBride, Kenny Chesney

in 2013, for his immense contributions to music, Hall received the Grammy Trustees Award. He was featured in the 2013 documentary “Muscle Shoals” which reminded us of his huge impact on the that sound from Muscle Shoals, Alabama. He was also inducted into the Alabama Music Hall of Fame in 1985. In 1971, Hall was named Producer of the Year by Billboard magazine.

He was born in Mississippi on January 31, 1932 but raised in Franklin County, Alabama. Interestingly he lost his wife and father within a two-week-period as a young man which got him out of the factories. It was at that point that he dived head first into his music – taking it more seriously as a vocation. Hr played guitar, mandolin and fiddle. He formed a band and started writing songs. In the late 50’s he quickly understood that writing and publishing songs could be a goldmine and he was good at it.

He also published his memoirs called, “The Man from Muscle Shoals: My Journey from Shame to Fame.” – by John Beaudin