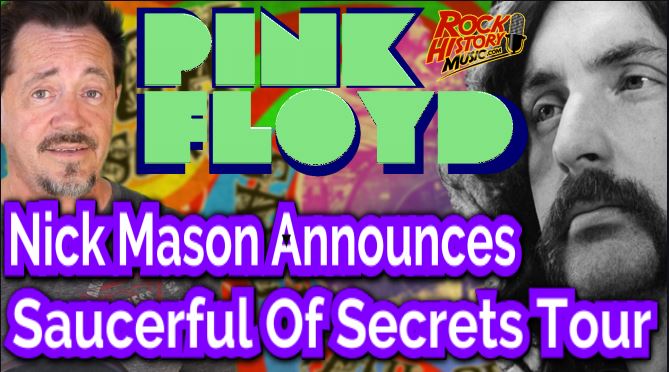 Turns out the first four shows in London sold out fast and turned out good. So now the former drummer for Pink Floyd has announced over 20 dates across Europe and the U.K. The first is on September 2nd in Stockholm Circus, Sweden and winding down Nottingham, UK on September 29th. So far there are no North American dates.

Mason has said that it’s important for fans to understand this is not a tribute outfit since they don’t want to play the songs exactly as they were on the albums “The Piper at the Gates of Dawn” and “A Saucerful of Secrets.”

As for Kemp doing some Syd Barrett Mason says, “Gary’s not quite taking the place of Syd, It was to do with who had the enthusiasm for it, and Gary did. … I hope different elements will appeal to different people. Something like our version of ‘Bike’ is one of the more difficult things we’ve tackled. And then there are things like ‘Set the Controls for the Heart of the Sun,’ just because it’s one of my favorite things to play.”

Nick Mason is 74 and is founding member of Pink Floyd going back to the mid-sixties. He formed the band with Roger Waters and the two former members who we have lost Syd Barrett who we lost in 2006 at 60 and Richard Wright who was 65 when he passed in 2008. In 1968 Barrett was replaced by David Gilmour.

I just talked to Alan White of Yes yesterday and he says though touring is psychically hard he finds it’s beneficial for his health – It’s like exercise. We will post part one of that interview this weekend. Also look for exclusive interviews with one of the former lead singers of the Alan Parson’s Project Lenny Zakatek, Jim Messina of Loggins & Messina, Poco and Buffalo Springfield, a New York superstar that never was Elliott Murphy. In the 70’s he was touted as the next big thing which, of course, can be the kiss of death. He was the subject of the 2015 documentary film, “The Second Act of Elliott Murphy” about his stardom, bad breaks and move to France and much more on the way. – by John Beaudin