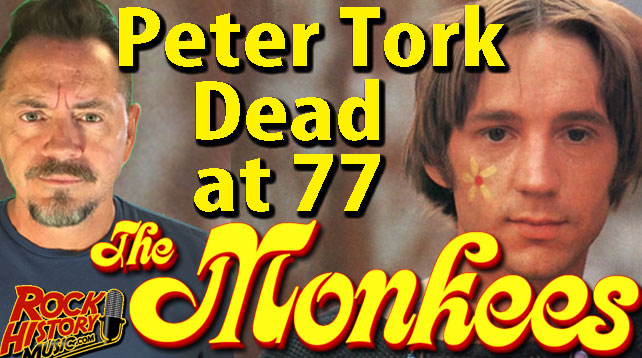 Peter Tork of the Monkees, Dead at 77

He was the oldest member of the band. Just 24 when the Monkees phenomenon started in 1966. Though compared and meant to be in the same lane as the Beatles the Monkees were certainly a different animal but that’s not to say they didn’t leave an incredible mark on Rock-and-roll.

They set up the Monkees with Tork on bass alongside singer-songwriter Michael Nesmith, played guitar, with drummer Micky Dolenz and Davy Jones on lead vocals. The latter two were presented up front as lead singers even though all of them sang.

He was born Peter Halsten Thorkelson Feb. 13, 1942, in Washington, D.C… Both of his parents were folk music fans and bought him both a guitar and banjo when he was just a kid so Tork, however, was a musician long before the Monkees. He also played the piano. Before his fame, Tork played in coffee shops in New York City with the shortened last name of Tork.

Even though in the beginning they didn’t write or play on their own songs outside the vocals. On their debut album simply titled “The Monkees’ from October 1966 the group as a whole never play together with the exception of two tracks written and/or co-written by Michael Nesmith where Tork also plays guitar. Tork told CBS news that producer Don Kirshner, discouraged the band to even be in the studio during the recording leaving most of it to studio musicians like the wrecking crew.

In spite of that or maybe because of it the Monkees soared. Their like-ability on TV was huge. That show only last 2 seasons from 1966 to 1968 but there was a hunger for that Beatle-like hijinks that was inspired by the Fab fours “A Hard Day’s Night” and “Help!,” Tork was the silly on – a self-professed dummy on the show which was an act but a lovable one at that. He always had that confused smile when he didn’t get what was happening in the room. He once told the New York Times the emotional age of the Monkees was 13.

In 2016, while touring with the Monkees Tork told the Telegraph, “This is not a band. It’s an entertainment operation whose function is Monkees music, It took me a while to get to grips with that but what great music it turned out to be! And what a wild and wonderful trip it has taken us on!”

He got the part via Stephen Stills urging, after the future Crosby, Stills, Nash and Young member failed his audition he encourage his friend to give it a try.

Tork was involved with many Monkees reunions. When Jones died in 2012 Nesmith who was usually hesitant to rejoin got back into the fold for their 50th-anniversary tour.

Tork’s death was announced originally on the band Facebook book page. He was diagnosed with a rare form of cancer that affected his tongue in 2009. – by John Beaudin