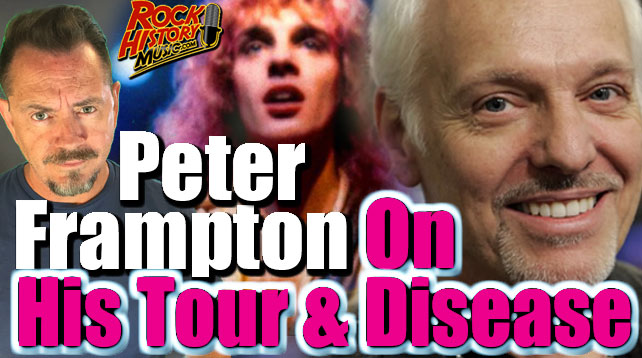 July 28, 2019 – There is a great new interview with Peter Frampton at GuitarWorld.com where he opens up about where he’s been and that farewell tour by Joe Bosso. He details what led to Frampton finally going to see a doctor and being diagnosed with inclusion body myositis (IBM).

It all started 9 years ago when he was hiking with his son in Big Sur in California and the hike all seemed quite laborious. It got worse and he thought it was just age then four years ago he fell at a gig and then it happened two weeks later. Shortly after he was diagnosed with an inflammatory muscle disease that affects the legs, arms, hands, and fingers. He’s actually set to begin a drug trial for the disease. He also upped his practice routine which doctors told him would help.

As for the Farewell tour, Frampton told Guitar World, “The idea was, ‘Let’s do this while I can still play great because we wouldn’t want to wait a year and find out that things are different, I’m like any other guitarist — I’m a perfectionist. I want to go out there and really do it, you know? I would never want to be on stage knowing that my playing was substandard but hoping that no one notices. That’s not me.”
Frampton says he does not​ want sympathy, “This is life-changing, but it’s not life-ending, I’m no different from anyone else. We’ve all got stuff we’re dealing with. This just happens to be what I’m dealing with, but I’m very positive about the future.”
He’s also been recording three albums. Frampton says, “I’m stockpiling, for obvious reasons,” he says. “I want to play as much as I can while I still can.” And if he can manage it, there could be a fourth album on the way.