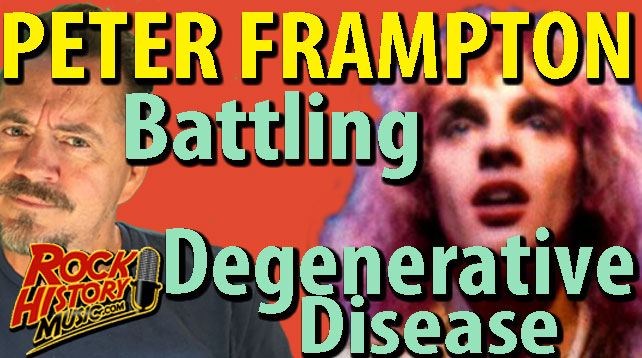 68-year-old singer..his next tour will be his last. He told CBS this morning, “Between October and two days ago we’ve done like 33 new tracks. I just want to record as much as I can. Now, for obvious reasons. He told the network he as a degenerative muscular disease. He has IBM, which is Inclusion body myositis which is a rare and incurable inflammatory condition. It causes muscles to weaken slowly. Frampton says the hardest thing now is going up and down stairs stating that he’ll have to get a cane. He says he’s also noticed that it’s hard to put things over his head. Frampton was diagnosed 2 1/2 years ago after a fall off the stage. The singer/guitarist says he really noticed the progression of the disease when he went on vacation with his daughter in the latter part of last year in Maui and he had a bad fall on a boat. So he knew it was time to make farewell plans. This disease affects his fingers so as a guitarist it was important to act fast. Frampton says he’s already felt it in his fingers but still can play great right now but in a years time, “maybe not so good. It’s my passion. I have been playing guitar for 60 years. I started when I was 8 and now I’m 68 so I’ve had a very good run.”

We will put a link to the CBS interview in the description of this video. They talk about his first fame with the Herd in the sixties, then co-founding Humble Pie and then to 1976 with that live album that spent 10-weeks at #1.

Frampton says his kids were devastated when he told them about his condition but he reminded them that IBM is not life threatening it’s life-changing. Then he jokes that his kids have been about it and all his ex-wives as well. He also promised that fans will not walk away from seeing him on this farewell tour thinking he can’t play anymore. He told CBS he certainly can but he just doesn’t know for how long. He is participating in a new drug trial at Johns Hopkins hoping for the best.

Many Farewell tours are not quite the last hurrah for artists and Frampton adds, “I think the Who have done 27 Farewell Tours now but maybe this is the Farewell tour but if the drug trial works maybe they’ll be the miracle tour.”

Here we are talking about another Farewell tour but Peter Frampton is still with us – he survived the seventies. He will record again possibly do one-off shows..maybe a residency somewhere. – by John Beaudin Check out the CBS Interview here https://www.cbsnews.com/news/peter-fr… Check out our “Where are they Now” video on “Frampton Comes Alive” https://www.youtube.com/watch?v=3fBXD…