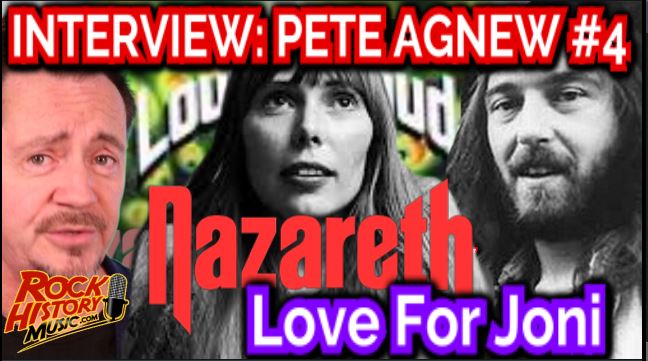 Nazareth’s Pete Agnew On Love For joni Mitchell & “This Flight Tonight” (#4)
Nazareth wrote most of their own songs there were a lot of retooled covers like Leon Russell’s “Alcatraz” and “Vigilante Man” by Woody Guthrie from 1973’s “Razamanaz.” They did Randy Newman’s “Guilty” and “Beggers Day” by Nils Lofgren and “Love Hurts” by Everly Brothers songwriter Boudleaux Bryant who wrote tons of hits with his wife Felice – look them up. On “Close Enough For Rock ‘n’ Roll” there was the Byrds “So You Wanna Be a Rock ‘n’ Roll Star” by Roger McGuinn and Chris Hillman and that’s just until 1976. Three years before on the “Loud ‘n’ Proud” album Nazareth tackled Bob Dylan’s “The Ballad of Hollis Brown,”Little Feat’s ”Teenage Nervous Breakdown” by Lowell George and “This Flight Tonight” written by Joni Mitchell. All these tunes have something in common – they were all turned upside down according to Nazareth’s bassist Pete Agnew. They needed not to sound like the originals. (Clip 009) (Clip 007)

Nazareth has just released their 24th studio album, “Tattooed On My Heart.” We will have more from our converation with Peter Agnew of Nazareth next week.We will have a link to Nazareth’s website in the description of this video.http://www.nazarethdirect.co.uk/website – by John Beaudin