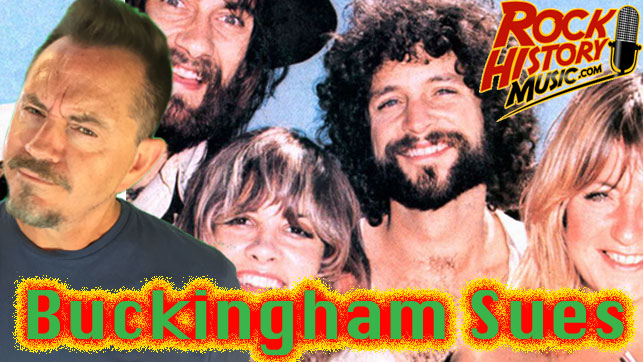 Yesterday we learned that according to Buckingham he was fired from the band because of Stevie Nicks. According to the report in Rolling Stone magazine the singer said she’d never share the stage again with him after she claimed he smirked at her during her speech in January at a MusiCares benefit show at New York’s Radio City Music Hall. A few days later their manager Irving Azoff told Buckingham that he was gone. He was replaced in the band by Heartbreakers guitarist Mike Campbell and Neil Finn of Crowded House.

Now Buckingham has filed a lawsuit for breach of fiduciary duty, breach of oral contract and intentional interference with prospective economic advantage.

The lawsuit says that Buckingham asked the group to postpone their tour three months so he could so solo music and solo shows but the they refused so he decided to postpone his solo stuff for a year. The papers also say each member of the band would earn $12-$14 million each from a deal with Live Nation

Though there never was a written agreement between this, the “Rumours” version of Fleetwood Mac with Buckingham, Nicks, Mick Fleetwood, John McVie and Christine McVie but California’s Uniform Partnership Act of 1994 says even without that no partner of the band “can be terminated from the Partnership without cause.”

On February 28 Buckingham sent Fleetwood an email trying to fix things but nothing happened. When he emailed John McVie he responded by saying he couldn’t have contact with him.

Buckingham said, “After forty three years and the finish line so clearly in sight, it’s hard to escape the conclusion that for the five of us to splinter apart now would be the wrong thing, At the moment, the band’s heart and soul has been diminished. But our center, which had seen us through so much, is only laying dormant.”

Fleetwood Mac released a statement a comment saying they’ve not seen the complaint yet. – by John Beaudin