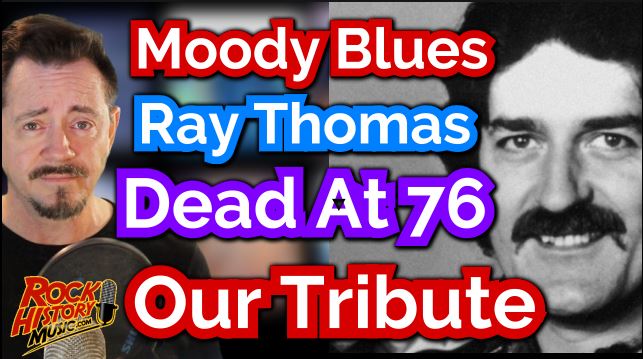 He died at his home after a battle with prostate cancer. His record company released the following statement, “It is with profound sorrow and sadness that Cherry Red Records and Esoteric Recordings regret to announce that Ray Thomas, founder member, flutist and vocalist of the Moody Blues, passed away suddenly at his home in Surrey on Thursday. We are deeply shocked by his passing and will miss his warmth, humor and kindness. It was a privilege to have known and worked with him and our thoughts are with his family and his wife Lee at this sad time.”

Thomas had to step away from the band just a few years ago and in 2014 confirmed that he had been diagnosed with prostate cancer.

Thomas was with the band from the beginning, back in the Denny Laine days and before they carved their future song with Justine Hayward and John Lodge. Their first album “The Magnificent Moodies” featured the hit “Go Now” which was sung by Laine. It would be their only UK No. 1 song. That was 1965.

By 1967 they were a different band. They were no longer chasing that Merseybeat sound of the British invasion instead they carved out their own brand of orchestral rock elements and an early helping of PProg Rock. Their second album, “Days of Future Passed.” Their record label wanted the band to record Dvořák’s Symphony No. 9 but they had their own ideas. It was a delicious spacious adventure and in 2007 Rolling Stone included it in its list of essential albums of 1967. Thomas provided Flute and backing vocals on the big hit from the album, “Nights in White Satin.” and flute on it’s follow up “Tuesday Afternoon.”

The band followed that up with the UK #5 album “In Search of the Lost Chord” in 68 and their first of three number one albums, “On the Threshold of a Dream.” The other two were “A Question of Balance” in 1970 and “Every Good Boy Deserves Favour” the following year. The band took a break in the mid seventies and broke up until 1977.

The moody Blues has another string of success in the 80’s with “Long Distance Voyager,” “The Present” and “The Other Side of Life.” At that point Thomas’ role started to diminish as they went deeper in 80’s synth-pop. He played a bigger role by 1991’s “Key of the Kingdom.” He retired in 2002.

Thomas was a showman and served as the band MC quite often and he also was a prolific writer with the band.

Thomas and the Moody Blues have sold over 70 million albums and are set to be inducted into the Rock and Roll Hall of Fame this year. – by John Beaudin