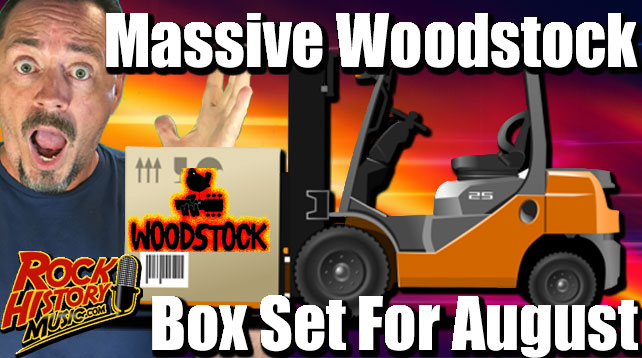 May 8, 2019 – This will be the motherload of box sets and, believe it or not, will include every act from the classic Festival for the first time. We’re going back to the garden with a Peterbilt and picking up the pieces.

This is timely since after the big Michael Lang 50th Anniversary Festival was canceled but this boehmite collection will probably bring you back to 1969 much easier than any “tip-of-the-hat” festival. It is called Woodstock 50 — Back to the Garden — The Definitive 50th Anniversary Archive. It will include every not played at the original Woodstock except three songs. Most of this collection has tunes never released before. This new Rhino collection has, as mentioned, every act and 432 songs and 267 of those have never seen the light of day.

So now you’ll get complete performances of the Who, Joe Cocker, Sly, and the Family Stone, Crosby, Stills, Nash & Young plus acts who were not even on the soundtrack or original movie like the Band, the Grateful Dead, Creedence Clearwater Revival, and Janis Joplin.

Also, the tracks are also arranged chronologically, by day and set times. So it starts with that iconic set from
Richie Havens’ opening set that August Friday in 1969 to Jimi Hendrix’s festival-closing set on Monday morning. Also, each act gets their own CD.

The box set will also include a Blu-ray of the original Woodstock film, a guitar strap and a replica of the original festival program. It will cost $799. There will also be a smaller version like a 10-disc and 3-disc set

John Fogerty says the reason CCR’s stint was never seen if the band followed the Grateful dead on stage who went on forever. So instead of a 9PM start for CCR they got on just after midnight and everybody was starting to fall asleep plus the band didn’t even know they were being recorded.

When the original Woodstock album was being compiled, Fogerty says he was sent a recording of “Bad Moon Rising” for inclusion and rejected it. “There was no audience participation at all,” he says. “It was a wonderful performance, but there was no reason to show Creedence having to struggle, so I opted out. Why show the people a weakness?” Not surprisingly, Fogerty says he’s never seen the Woodstock movie, either. – by John Beaudin