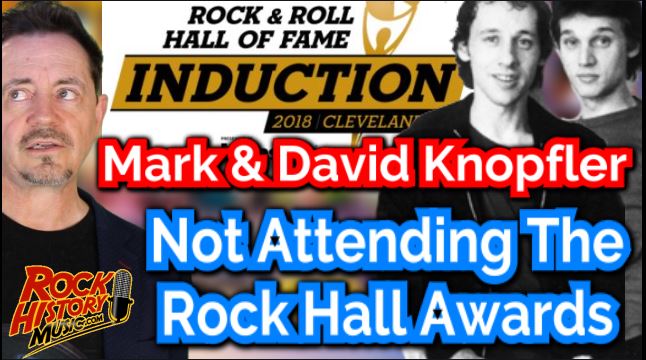 Every years there are high hopes around the Rock and Roll Hall of Fame and each years there are a few let-downs. Many fans are disappointed at word that neither Mark Knopfler or his brother David will be at the ceremony.

Keyboardist Alan Clark released the following statement, “Well, here it is and it’s official: Myself, Guy Fletcher and John Illsley will attend the ceremony, where we’ll be be performing an unplugged version of ‘Telegraph Road’ with me on harmonium, Guy on ukulele, John on banjo, and the vocal performed by the three of us as a three part harmony.”

The ceremony is on April 14th in Cleveland. David Knopfler says the Rock Hall reneged on his travel costs. He said, “In their wisdom, after promising to pay my expenses they reneged on their promise, I can well understand that with only $5 mil a year in sponsorship’s and 100k a table and no fees for the artist that paying my taxi to the airport must have given them heart murmurs like Squeers hearing Oliver Twist asking for more and frightened them into refusal otherwise one might get the wrong idea entirely about what they’re all about.”

This year Ann Wilson will induct the Moody Blues, Howard Stern will do the same for Bon Jovi, the Killers’ Brandon Flowers will induct the Cars, Mary J. Blige and Andra Day will give the tribute Nina Simone and Alabama Shakes’ Brittany Howard are set to induct Sister Rosetta Tharpe. – by John Beaudin