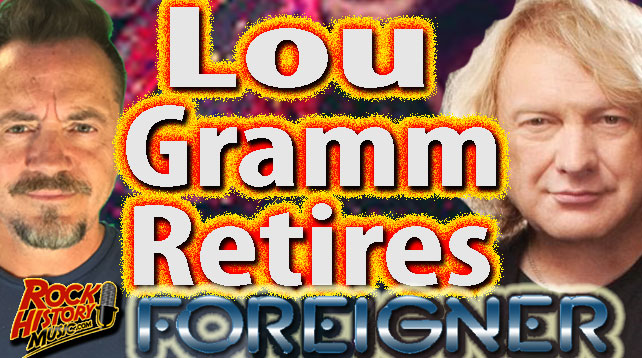 There was no final tour extravaganza just some thought provoking words about the past and future from singer Lou Gramm. Last night (Dec 29, 2018) at his concert in New York state Gramm basically retired. He told the crowd, “You’ve got to be smart enough to know when to walk away from it, and it’s that time for me.” Gramm who’s 68 said he’d had a lot of fun and worked really hard but, in the end, after talking to his wife and a few people in the industry he made the decision saying that he was really excited when he started but he knows its time.

It was a big surprise to the fans who cheered him in respect of his decision. He did it with class and announced it to the fans which was classy.

As I always say, no matter what happens we always still have the music. Who could forget hearing “Feels Like the First Time” for the first time in the winter of 1977. That was the era when the Eagles “Hotel California,” 10CC’s “The Things you Do For Love,” and “So Into You” by the Atlanta Rhythm Section were still in the Top 10. I had just turned 17 and heard it on WKBW in Buffalo. It was one of those turn-your-head-to-the-radio experiences. I remember writing about the tune in my journal and a big part of that was Lou Gramm’s vocals. Many of us had those moments-in-time experiences with Foreigner. I only saw them once in the summer of 1980 at an outdoor festival with Warren Zevon and Ian Hunter.

Gramm was the true voice of that band beside guitarist Mick Jones. Foreigner had 16 Top 40 hits with Gramm and 9 were in the top 10. “I Want to Know What Love Is” was their biggest hits which reached #1 in 1984. On spotify it’s also their most played song at 165 million plays next to #2’s “Waiting For a Girl Like You” at 55 million plays and they are followed up by “Juke Box Hero,” “Cold as Ice,” “Hot Blooded” and “Urgent.”

He was diagnosed with a inoperable brain tumour when he was 47 but discovered a laser surgery solution on the TV show 20/20. After the surgery Gramm found out his pituitary gland was damaged, casing him to gain weight and kept him out of commission for a year.

He’s had an up and down history with his former Foreigner bandmate Mick Jones but they mended fences after being inducted into The Songwriters Hall of Fame which lead to the pair performing again for anniversary shows recently.

We reported earlier this year that the pair wanted to work together again in the studio on old foreigner material that was never finished. Will he perform again with Foreigner? Gramm is also set to join Asia with John Payne in January.

At least we are announcing a retirement not another obituary. – by John Beaudin