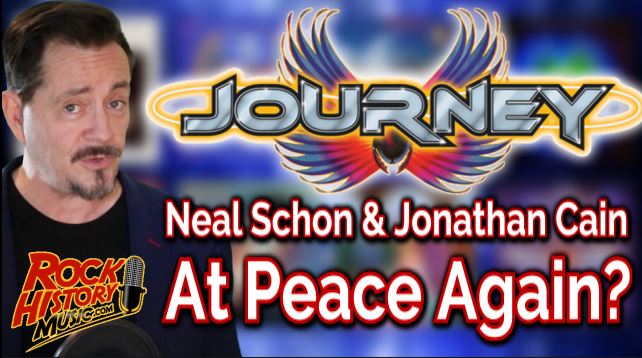 They may be on different sides of the political fence but the pain certainly unite as far as Journey is concerned. Jonathan Cain says his feud with guitarist Neal Schon Is on hiatus? The keyboardist adds that the big fight last year was one of many “bumps in the road” the two have had since he first appeared on Journey’s biggest album “Escape” in the summer of 1981.

You may remember that this was all about Cain and band-mates Arnel Pineda and Ross Valory visiting the White House with help from Cain’s wife Paula White who is the spiritual adviser to President Donald Trump. Schon felt that the visit looked like Journey was endorsing the President. Cain told Rolling Stone magazine, “For me, it was a historical chance to go, and it wasn’t political,” Cain said at the time he and Schon were not on speaking terms and didn’t think he’d want to come to the White House.

Cain adds, “Any relationship that goes on that long, there’s bound to be bumps in the road. But I think the band and our fans are bigger than all of this stuff. When you read my book, you’ll see the mountains and the struggles that we had to overcome together. … Neal and I brought this thing, along with the rest of the guys, back to where it belonged. I’ll always be grateful for that. We’re brothers. I’m proud of that.”

The keyboardist also said their relationship is like that with a spouse where you have to live in the same house and you have to make it work for the fans for the music and as for new music Cain said the time was not right. Schon wanted to make some new tunes and Cain felt they should wait. He did point out he has some great new music ideas in his head.

Journey and Def Leppard will tour together this coming summer. – by John Beaudin