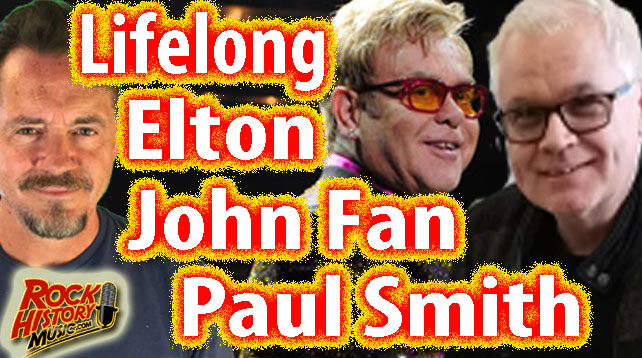 This is part one of a new series where we’ll talk to Elton John fans around the world. Not fair-weather fans, we’re talking music lovers who know all the album and every song. When an artist changes the direction of your life, and we all know that feeling, a certain trust is build with that performer. Trust usually is solidified when consistency is involved. Sure that can happen with one album but look at the good faith Elton John created with his fans in the 70’s and even a new generation the following decades.

Paul Smith, who runs the Elton John Online Facebook group and owner of Vinyl Collectors and Sellers in Salisbury, U.K., joined me on Skype to talk all things Elton. I should also point out that Elton featured Paul and his daughter in the backdrop of his first U.S. Farewell Show in Allentown, Pennsylvania on September 8thof 2018.

Paul Smith is owner Vinyl Collectors and Sellers in Salisbury, U.K. He also runs the Elton John Online Facebook group – there will be links to both in the description of this video. He shared something with me that diehard fans all share with other Elton John fans – a sense of friendship and family. There’s always power behind a large group who love the same thing. Paul is thankful to be part of it.

We will have more from Paul and other Elton John fans-experts in the coming weeks. Remember there will be links to his record store in the U.K. And his Elton John Online Facebook group in the description of this video. Also if you are fan of Elton’s and want to be a guest on our channel message me at my own John Beaudin facebook group…there will be a link in the description as well. Also if you have an Elton man or woman cave we’d love to feature you. – by John Beaudin