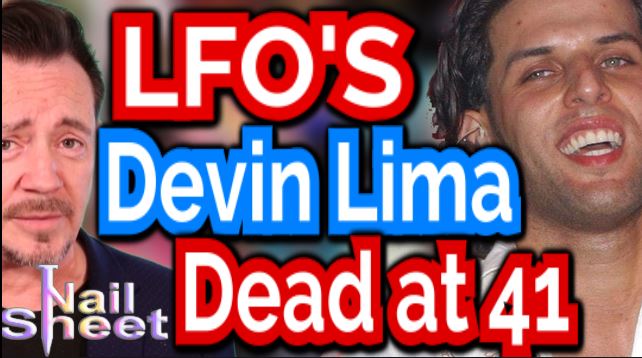 LFO’S DEVIN LIMA DEAD AT 41
The singer died after battling stage 4 cancer for the last year. LFO were known for their hits “Summer Girls” and “Girl On TV” from 1999 as well as “Every Other Time.”

The band was originally know as the Lyte Funkie Ones with three members Brad Fischetti, Rich Cronin and Brian Gillis who left before they made it on the charts. In came Lima in 1999 and their debut album which featured that #3 hit that seemed to make many cultural references but the song made no sense. It reached #3 on the Billboard chart and has been compared to Adam Sandler’s “The Thanksgiving Song.” “Summer Girls” most famous line was “I like girls that wear Abercrombie and Fitch.” They also refrenced Cherry Coke, Macaulay Culkin from Home Alone, Michael J Fox and his character Alex P Keaton from Family Ties, Kevin Bacon in Footloose, New Kids on the Block, Beastie Boys and the Wizard of Oz among others. Their self titled album sold 2.5 million copies.

The following year the band opened for Britney Spears. Their sophomore album “Life is Good” from 2001 did not sell well and but did have a U.K. hit “Every Other Time.” By 2002 the boy band craze was suffering a bit and the group broke up.

In 2009 they were back for a short time and then Cronin died of leukemia in 2010. Lima released a cover of Sly and the family Stone’s “If You Want Me To Stay” in 2006. With his connection to that tune Lima was invited to perform a tribute to Sly Stone at the 2006 Grammys along with Steven Tyler and Joe Perry of Aerosmith, Fantasia, Maroon 5.

In July 2017 Lima and Fischetti reformed LFO and released their first single in 15 years, “Perfect 10.” Just three months later Lima was diagnosed with stage four adrenal cancer and had one kidney removed. His family confirmed that he passed today (November 21h, 2018). – by John Beaudin