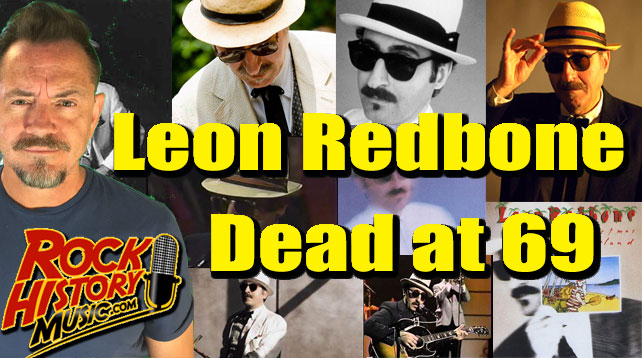 Leon Redbone Dies at 69
May 30, 2019 – He was an enigma to some and a genius to many. Leon Redbone was definitely an old soul. Even the statement released on his website made that clear. It read, “It is with heavy hearts we announce that early this morning, May 30th, 2019, Leon Redbone crossed the delta for that beautiful shore at the age of 127,”

The singer often tipped his hat to old-school vaudeville and Tin Pan Alley-style but was cool school from the day he released his first album “On the Track” in 1975. It was strange. Here was a guy whose musical styles were stuck in the 20s and ’30s who appeared twice on the first season of Saturday Night Live in 1975-76. He was frequently a guest on the Tonight Show with Johnny Carson, did the theme song for the TV show “Mr. Beledevere” and the movie “Harry and the Hendersons.” Then there was his duet with Zooey Deschanel from the movie Elf with “Baby, It’s Cold Outside.” He was also the voice of the Snowman in that film. He also did loads of commercials.

When he was asked why he concentrates on the decades of the 20s and 30s, he said: “It was a more interesting time, a more interesting period in the history of the music development of certain styles of music. Something about it seems to speak to me more than what came after.”

He retired in 2015. At the time his handlers had said he had unspecified health concerns and couldn’t record any longer.

Interestingly one of his popular covers in concert was “Please Don’t Talk About Me When I’m Gone” and here we are today tipping our hat to him.

Bob Dylan was a huge fan telling Rolling Stone magazine in 1974, “Leon interests me. I’ve heard he’s anywhere from 25 to 60, I’ve been [a foot and a half from him] and I can’t tell, but you gotta see him. He does old Jimmie Rodgers, then turns around and does a Robert Johnson.”

Redbone once said, “I don’t do anything mysterious on purpose. I’m less than forthcoming, but that doesn’t necessarily mean I’m mysterious. It just means I’m not inclined to go there.” – by John Beaudin