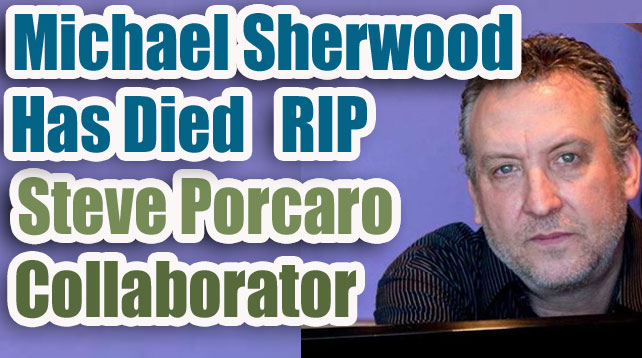 Keyboardist Michael Sherwood Dead at 60
November 5, 2019 – His Brother, Billy Sherwood, of the band Yes released the following statement, “ It’s with the heaviest of heart that I want to let you all know my dear brother Michael Sherwood has passed away. Our family is devastated by the loss and trying to process this. I ask that our privacy be respected at this difficult time. In time we can reminisce and share stories of Mikes’s life, loves and his musical journey but for now, we are grieving and our hearts are overtaken with immense sorrow. I am one of three Sherwood brothers, proud sons of Bobby and Phylis Sherwood. May my brother Mike Rest In Peace and be rejoined with my oldest brother Robert and with our father Bobby in heaven. I love you Mike and I will miss you terribly.”

He was from a very talented family his dad Bobby Sherwood was an actor/musician and a bandleader and he was the one that got Michael into the keyboards at 4.
For Toto fans, he was known as Steve Porcaro’s collaborator especially on his solo album “Someday/Somehow”, from 2016, and the pair contributed to Toto XIV the year before. He was in the band Lodgic with Jimmy Haun in 1977 where they covered, Peter Frampton, Frank Zappa and Yes. In the early 80’s they moved to LA and were mentored by Toto’s Jeff Porcaro. By 1986 they released their debut album that was supposed to be produced by Toto’s David Paich and super-producer David Foster. That later changed to Paich and James Newton Howard but ultimately the job went to the pairing of Paich and Steve Porcaro. He and Steve also had a previously unreleased tune on Michael Jackson’s “Triller 25.”
Sherwood also worked with Air Supply, Anderson/Bruford/Wakeman/Howe and with Yes. – by John Beaudin