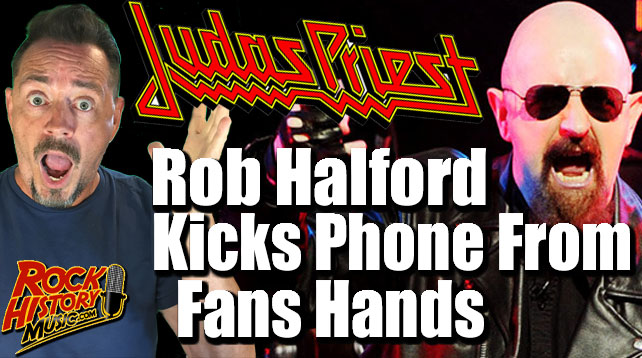 May 30, 2019 – It all happened 5 days ago (May 25, 2019) in Rosemont, Illinois. The band had only played six songs when Rob Halford either was trying a new dance move, kick the phone while a fan was filming or trying for a three-point field goal. (Maybe it’s a hidden talent?) The band is on the road with Uriah Heep (we will have an exclusive interview with Phil Lanzon of that band coming up in June). It seems that Halford was pissed at a fan using their flash while filming him so that light might have been partially blinding him. So while they were playing “Judas Rising” he goes for the kick. There is a link in the description (at the very top) of the incident.

Is that assault? How would you feel if he did that to you? Would you ever get yourself in that situation? Did that person even know the flash was on?

Just recently Bob Dylan stopped a show and asked the audience if they wanted him to pose for a picture or sing a song. I’ve done some filming while at the concert but I barely ever watch the stuff. Do You? I’ve used some footage on this channel without using the music because of copyright but my takeaway was I lost 20 minutes of a concert filming something I’ll never watch. Do you film?
Check out the concert clip here