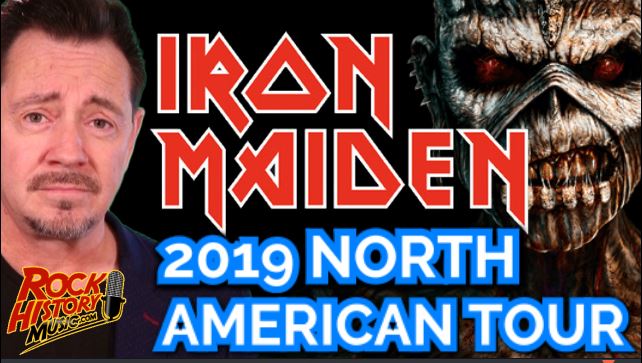 They did it in Europe now the tour comes to this side of the pond with 34-dates announced for the summer of 2019. The tour kicks off in Sunrise, Fla.on July 18thuntil Sept. 25thin San Antonio, Texas. Tickets will go on sale on November 16thfor some shows and November 19thfor others so check your local listings. There will also be VIP packages available.

The tour has been big even for Iron Maiden standards including playing tunes like “Flight of the Icarus” for the first time since the 80’s. Everyone’s been talking about that big World War II spitfire plane on stage and singer Bruce Dickinson getting into a sword fight with band mascot Eddie. He’s made appearances before but if you haven’t seen the current footage look it up on YouTube.

Bassist Steve Harris says, “We gave a lot of thought to the set list for this tour as the songs needed to follow the narrative of the changing worlds of the stage show, We feel we ended up with a very strong and well balanced set mixing songs we haven’t played in many years like ‘Flight of Icarus,’ ‘Sign of the Cross’ and ‘The Clansman’ with songs we know the fans want to hear like ‘The Trooper,’ ‘2 Minutes to Midnight,’ ‘The Number of the Beast,’ ‘Fear of the Dark,’ ‘Run to the Hills,’ ‘Hallowed Be Thy Name’ and others,

Dickinson added. “We’re immensely proud of this show and we’ve had great reactions from the many fans who came to see us in Europe earlier this year. The production is based on our mobile game The Legacy of the Beast, which basically takes various incarnations of Eddie into many different Maiden Worlds.”