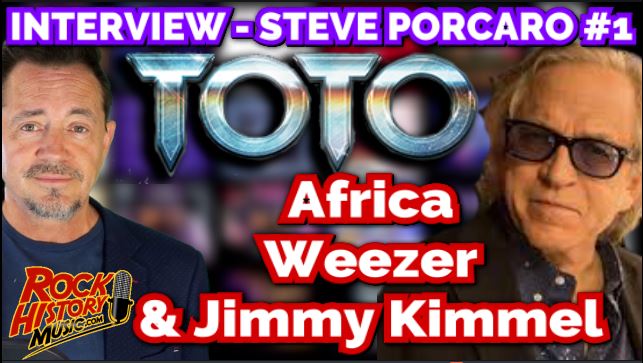 Well this thing grew and grew. After a viral campaign from a fan the band Weezer recorded Toto’s highest charting tune “Africa’ which went to #1 in 1982. It was one of four hit singles from the multi-Grammy winning album Toto IV. Weezer also recorded Toto’s big hit “Rosanna” a week before and just a few days ago Weezer performed “Africa” on Jimmy Kimmel Live with special guest Steve Porcaro – he’s also our guest today.

As of this tapping Weezer’s “Africa” has over 4 million hits and their take on ‘Rosanna” is at 1.1 million. Steve Porcaro and I talked for almost 90 minutes. We covered a lot of ground and a lot of albums. We’ll have part two of our interview with Steve in a few days. Also in the next few days our interviews with Lenny Zakatek one of the main lead singers from the Alan Parsons Project and Jimmy Messina of Buffalo Springfield and Loggins and Messina. – by John Beaudin