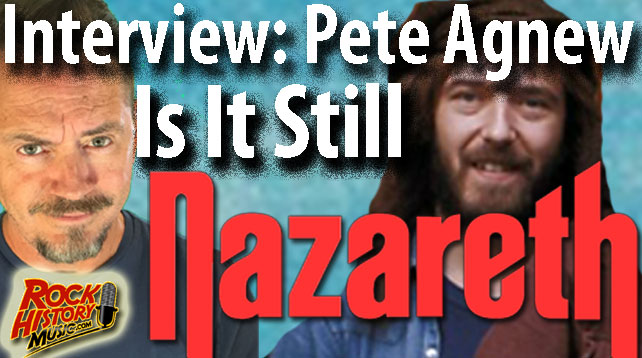 Can it still be the same band with only one original member? We Asked Pete Agnew About Nazareth.

January 1, 2019 – There are a lot of bands out there that are going on without any original members like Yes, Thin Lizzy, The Little River Band, Blood Sweat & Tears and Quiet Riot just to name a few. Nazareth’s classic line-up featured singer Dan McCafferty, guitarist Manny Charlton, bassist Pete Agnew and drummer Darrell Sweet who died in 1999. Charlton left in 1990 and McCafferty retired in 2013. Pete Agnew is the only original member left in the band and I asked him to respond to critics who say it’s not Nazareth anymore. (clip 014)

Nazareth released their 24thstudio album in 2018, “Tattooed On My Heart.” We will have more from our conversation with Peter Agnew of Nazareth next week. We will have a link to Nazareth’s website in the description of this video.http://www.nazarethdirect.co.uk/website– by John Beaudin

John Beaudin has been in major market radio (Edmonton, Vancouver & Calgary) for 35 years and a music journalist since 1989. He graduated from Broadcasting school as a news-man so he would have the skills to write about the artists that inspired him since he bought his first album, “Madman Across The Water” by Elton John as a teen. In the 80’s Beaudin was the host of the syndicated radio show “The Cross Canada Report” which had two versions (Rock and A/C). Beaudin was also asked to be a judge at the Juno Awards (Canada’s answer to the Grammys) Twice. He has anchored every position in radio including morning and afternoon drive and was a Program and Music Director for The Breeze and California 103 in Calgary. He currently hosts the popular Lovesongs at QM-FM in Vancouver and on iHeartRadio.