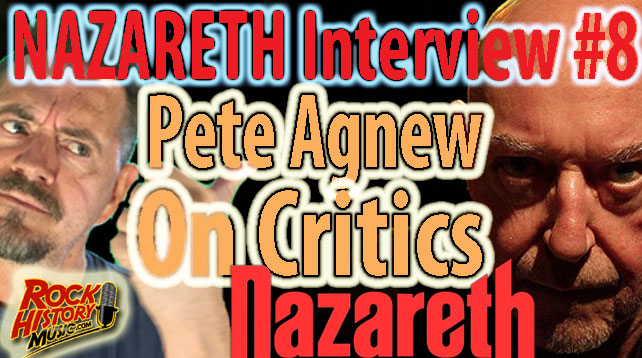 Pete Agnew Of Nazareth Has Words For the Critics (#8)

Every musician has to deal with them. You play in that kitchen and its part of the territory. Some folks are going to like you while others will hate. I've been lucky on this channel 99% of the comments have been great and/or constructive but now and then I'm just going to run into someone who just doesn't like my face or my opinions. It's part of the game. I was a music critic myself writing for a magazine in Vancouver – I know what comes with that.

Nazareth was formed in the late 60's they've had their fair share of bad reviews. I asked Pete Agnew, who is the only original member of the band left, how he dealt with bad reviews? (Clip 013)

Nazareth has just released their 24th studio album, “Tattooed On My Heart.” We will have more from our conversation with Peter Agnew of Nazareth next week. We will have a link to Nazareth's website in the description of this video. http://www.nazarethdirect.co.uk/website – by John Beaudin

John Beaudin has been in major market radio (Edmonton, Vancouver & Calgary) for 35 years and a music journalist since 1989. He graduated from Broadcasting school as a news man so he would have the skills to write about the artists that inspired him since he bought his first album, “Madman Across The Water” by Elton John as a teen. In the 80's Beaudin was the host of the syndicated radio show “The Cross Canada Report” which had two versions (Rock and A/C). Beaudin was also asked to be a judge at the Juno Awards (Canada's answer to the Grammys) Twice. He has anchored every position in radio including morning and afternoon drive and was a Program and Music Director for The Breeze and California 103 in Calgary. He currently hosts the popular Lovesongs at QM-FM in Vancouver and on iHeartRadio.