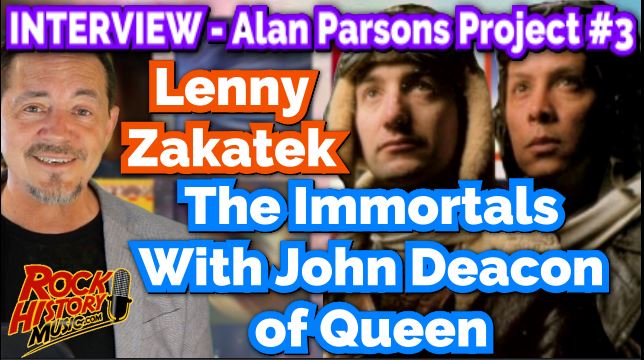 Lenny Zakatek was the second most used singer from the entire career from the Alan Parsons Project.

He sang ‘I Wouldn’t Want to Be Like You’ from ‘I Robot’ in 1977, ‘Damned If I Do’ from ‘Eve’ two years later, ‘Games People Play’ from ‘The Turn of a Friendly Card ‘ from 1980 and ‘You’re Gonna Get Your Fingers Burned’ from their biggest album 1982’s ‘Eye in the Sky’ just to name a few. The band used several lead singers on every project but Lenny’s 12 leads could fill a whole album with top shelf Alan Parsons Project tunes.

In the mid-80’s Zakatek was in a short lived band with Queen’s John Deacon called The Immortals They performed the tune, “No Turning Back’ from the film Biggles. I asked him about that. CLIP 011

I ask almost everyone I talk to if they, in their travels, ever got star-struck. CLIP 012

Check out John Deacon & The Immortals – No Turning Back https://www.youtube.com/watch?v=ZwfgK… Go To http://lennyzakatek.co.uk/